The face of surrender 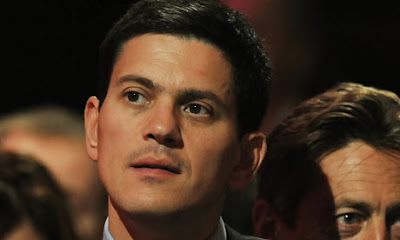 Having surrendered our foreign policy-making powers to the European Union, a process that is all but complete once the constitutional Lisbon treaty comes into force, little David Miliband goes for the obvious next stage – arguing that, in the corridors of Brussels, we should endeavour "to take a lead in developing a strong European foreign policy", thus confirming our vassal status.

For those lacking any understanding of history – which seems to include most of the MSM – a nation which no longer commands its own foreign policy is no longer an independent state.

Interestingly, it was precisely that issue which led to the Third Anglo-Afghan War in 1919, after Britain had insisted on taking control of Afghanistan's foreign policy, leading to the Rawalpindi Agreement on 19 August 1919 when control was re-established, from which date Afghanistan celebrates its independence.

We will shortly be in the absurd position of fighting for the security of the independent state of Afghanistan, from the position of being a vassal state of the European Empire (aka EU) – our presence legitimised only by it being a "legacy" policy on which we embarked before the steel jaws of the constitutional Lisbon treaty snapped closed.

To little Dave Milliband, however, this is a Good Thing. Speaking at the International Institute for Strategic Studies in London today, his idea of upholding British national interest is for the Empire to develop a strong foreign policy, warning that the UK would lose out internationally if it tried to oppose this process (not that we can) on the grounds of "hubris, nostalgia or xenophobia".

"The choice for Europe is simple – get our act together and make the European Union a leader on the world stage or become spectators in a G2 world shaped by the United States and China," he thus declares. And so it is that we "celebrate" our loss of independence, almost exactly 90 years after it was returned to a country for which our troops are now fighting and dying.

In the fullness of time, one wonders whether – when we have regained our independence – Afghanistan will be in a position to return the "favour" and send troops to the UK to help us beat off European jihadists, channeling international aid to us so that we can rebuild our churches and schools, destroyed after the decades of civil war.