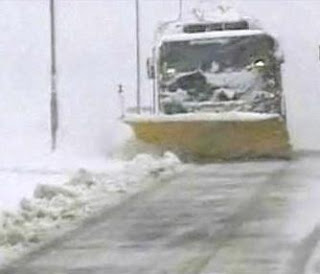 Unseasonable weather has killed at least four Poles. Three of them, including a shepherd, froze to death in the mountains of southern Poland. The other, a man, died when his car was blown off the road in the north of the country. Some Polish villagers suffered because they had not yet bought coal for the winter.

Meteorologists said that snow flurries were not uncommon in Poland in October, but the conditions had been unexpectedly severe this week.

In northeastern parts of the Czech Republic roads and railway lines have been blocked by fallen trees after strong winds and snow about 20in deep in the mountains. The CEZ power group declared a state of emergency in eight Czech districts because of power line damaged. A malfunction in a heating plant left many of the 40,000 residents in Jablonec and Nisou without heat and the mayor was considering closing schools.

This, as they say, is not normal.