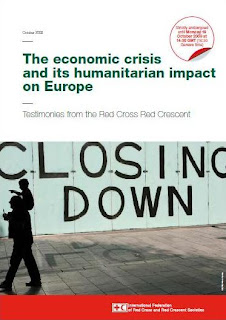 The Red Cross is preparing to hand out food parcels to vulnerable populations in ... wait for it ... Europe (i.e., the EU). According to the Swedish Red Cross Gen Sec Christer Zettergren, his Spanish colleagues are preparing to hand out food to hundreds of thousands of people in Spain. The same thing is happening in Italy and in Hungary, where the hand-outs have already started.

The Red Cross and Red Crescent have published a report on the socio-economic situation in Europe and near-Asia. Although the report is not a "fact-rich environment", it paints a pretty poor picture. The message is not a good one. They are certainly fearing the effects of a hard winter.

And so, for the first winter since the immediate post-war years, when international help organisations will have to send food-aid to countries in middle and western Europe, the leaders of the world will gather in Copenhagen to discuss ways to stop global warming. Meanwhile, the greenies want to close down what little industry we have left.