"Over my dead body" 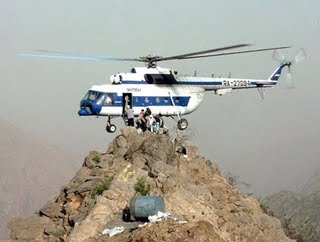 The Daily Mail is running a piece today which reveals that Lt-Col Thorneloe wrote a secret memo, a month before he was killed by an IED while riding in a Viking, complaining of the shortage of helicopters.

On June 5, reports the Mail, he had chillingly predicted the circumstances of his own death in his weekly report to the Ministry of Defence. Headed "'Battle Group Weekly Update", it reads: "I have tried to avoid griping about helicopters - we all know we don't have enough. We cannot not move people, so this month we have conducted a great deal of administrative movement by road. This increases the IED threat and our exposure to it."

This opens the way for the usual polemics about cost-cutting, etc., and one can confidently predict the howls of rage from the "usual culprits", politically motivated rather than inspired by any sentient thought.

But, buried in the piece – without the prominence that it should have (and completely omitted by The Daily Telegraph and The Times, which copy out some of the story) – is a comment from Tory MP Adam Holloway, a former Grenadier Guards officer, to whom the memo was leaked by an MoD official.

He has written a "devastating critique" of the handling of the war in a pamphlet shortly to be published by the Centre for Policy Studies, which we are told "reveals that despite clear evidence that a shortage of helicopters is killing British troops, defence chiefs are still refusing offers to supply more." Then we learn:

Only last month the Ministry of Defence turned down another offer of helicopters which could double Afghanistan flying hours for British troops fighting the Taliban. The Mail has independently confirmed that former RAF pilots offered to supply 25 helicopters within three months to back up the Chinook fleet which is stretched to breaking point.

We are also told that the deal would have cost the MoD just £7 million a month - a relative drop in the ocean - but the offer was rejected because the RAF did not want to share a role with private contractors.

Now, on 25 October 2007, almost exactly two years ago, I wrote a piece about providing contract helicopters in Afghanistan – flown by ex-RAF pilots - to make up for the dire shortage of RAF assets in theatre.

Writing from personal experience, as I had been directly involved in trying to get the MoD to accept this solution, I observed that the wholly negative reaction to some well-founded proposals was due to "the reluctance of the military to see civilian contractors encroach on 'their' war." I added: "Some of this is fuelled by a fear of the competition, with the civilians able to operate more flexibly, sometimes in conditions where military aircraft like the Lynx simply cannot fly." I went on:

And since they are vastly cheaper, they provide an unfavourable comparison, which might have the politicians asking why they are funding expensive military operations when they can get much more for their money by using contractors.

In effect, what we have, therefore, is the military crying "hands off, it's our war" – an exercise in protecting their own interests rather than going for what is needed.

The need for helicopters was then acute, in order to meet the growing threat from roadside bombs and I concluded: "This dog-in-the-manger attitude costs lives." It remained acute, and – as we now see – it cost more lives.

There was a solution, it could have saved lives, and I was writing about it in May 2007, when all the little Tory Boys were bleating about the military being "under-resourced". Not only was it a solution, it was a cheaper solution.

Yet throughout the torrent of media and political coverage on helicopters, no one would look at this issue. After being rejected by the MoD, we told the newspapers were told about it, many times, and we approached Conservatives MPs, but they actively opposed the solution - and helped kill the deal. One senior Tory MP, who shall remain nameless, told me: "over my dead body". The shortage of helicopters was too convenient a stick with which to beat the government.

Well, over the dead bodies of many soldiers, our Tory MP got his way, and so did the RAF. Nobody listened ... and people died. And you can put money on it that very few of the claque who have been shrieking for "more helicopters" will pick up on this story, and ask why it is that the Defence Chiefs rejected a life-saving solution. Is it a surprise that we get a little angry on this blog?