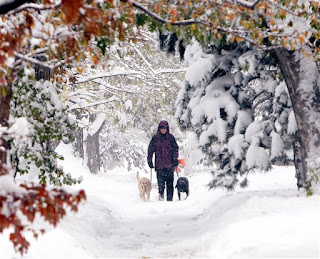 An early blast of winter walloped some western states with deep snow and slowly pushed into Nebraska and Kansas Thursday, bringing blizzard conditions to the eastern plains and causing treacherous roads, closed schools and hundreds of cancelled flights.

The fall storm spread 3 feet of snow and left much higher drifts across parts of northern Utah, Wyoming and Colorado, before its leading edge hit neighbouring states just to the east.

Wind-driven snow built to blizzard conditions over much of eastern Colorado. The weather service warned most area roads would be impassable Thursday night because of blowing snow and near-zero visibility.

The heaviest October snowfall in the Denver area in a decade forced the closure of hundreds of schools and businesses. Roads across the region remained snowpacked and icy. "Big storms like these, they seem to come around every 10 to 12 years," said Kyle Fredin, a National Weather Service meteorologist.

But it ain't only the snow. Low temperature records are being broken all over America. Guess we need to throw another few billions at global warming, just to be on the safe side.