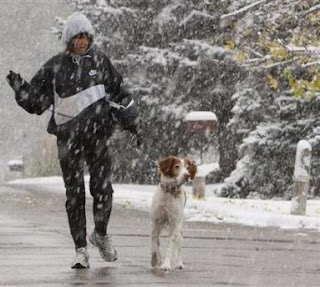 EU commission president José Manuel Barroso is very worried about global climate talks with less than two months left until governments are due to meet in Denmark to try to seal a deal.

Barroso's remarks came on the last day of negotiations in Bangkok by officials from 180 nations trying to narrow differences over how to share the burden of the fight against climate change and draft a deal to replace the Kyoto Protocol.

"Despite those efforts," Barroso says, "I remain very worried by the progress at this stage of negotiations where we are dangerously close to deadlock if we do not put some more impetus into this process."

One really does wish that the "very worried" Mr Barroso would read the news occasionally - and look at this picture, an unidentified woman walking her dog as early snow fell yesterday in Omaha, Nebraska. Several inches of snow accumulated. Then, at least, he would know why we want to shoot him.