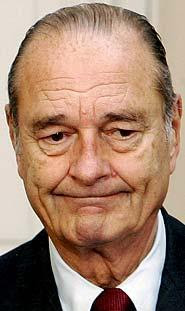 The Times, in the name of its witless hack Adam Sage , is telling is that Jacques Chirac, the former French president, has been ordered to stand trial for corruption in a case which has shed light on sleaze allegations from his time as Mayor of Paris.

In what Sage describes as an" unprecedented move", an investigating magistrate said Mr Chirac, 76, should be tried over a so-called ghost jobs scandal dating from the 1980s and 1990s.

Amazingly, Sage then tells us that the decision "will not only tarnish the reputation of the man who ruled France for 12 years, but it is likely to fuel public hostility for French politics in general."

Just who does he think he is kidding? This is the man universally known as le croc, presiding over a dung-heap of corruption for which French politics are notorious. It would be hard to find an ordinary Frenchman who had any respect for Chirac, or any for the political classes in general.

And nor will the trial ever get anywhere. In the event that procedural delays do not stall it for so long that Chirac will be dead, and honoured with a state funeral, the president of the day will almost certainly grant a pardon, making it an offence even to mention the conviction, as was the case with current EU commissioner Jacques Barrot.