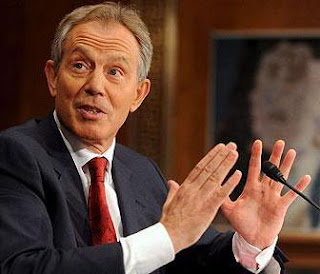 Most papers are running with it, but it is The Times which has it as its lead item – the support of David Miliband for Tony Blair's as yet undeclared candidacy for the position of supreme leader of the European Union (European Council division).

According to Miliband, Blair should be made head of a stronger European Union "that would be able to compete with China and the United States on the world stage". The new EU president needed to be someone who "stopped the traffic" in Washington and Beijing and was guaranteed the highest access to world leaders.

An additional advantage of his appointment would be that it would seriously – to use the technical term – piss off the Tories, who are looking forward to having their own Boy take hold of the reins of power, only to see them slip away, to picked up by that leering face in Brussels, rubbing in to all and sundry that the constitutional Lisbon treaty is just as dangerous as we have maintained all along.

By then, of course, it will be too late, when Boy Dave discovers that the Brown administration was the last government of Britain and the "colleagues" get down to running the show, without the encumbrance of democratically elected politicians throwing their toys out of the pram in the European Council, every time they are faced with something they don't like.

Strangely though, it seems as if the likes of Angela Merkel are warming to the idea of Emperor Blair, precisely because of the anticipated Tory reaction, believing – quite wrongly – that a Cameron administration will be "eurosceptic". His appointment would, says The Times balance a British eurosceptic government in the event of a Tory victory.

One struggles to believe that Merkel could be so naïve as to believe it would actually mattered who took over the local government in Britain, and that she could tolerate the leering face of Blair across the table every time she descended on Brussels. But, the idea has a power of its own, sufficient possibly to sustain the Blair Bandwagon.

More worrying, perhaps – as if the prospect of Emperor Blair wasn't worrying enough – is the Miliband's rationale for his appointment, this stale, outdated paradigm that it would help the EU "compete with China and the United States on the world stage".

Far be it for me to sound alarmist, but as there are signs that the Taleban could be breaking out of its localised tribal base, to become part of the global jihad, far from looking to "compete" – with the United States, in particular – we should be urging the closest possible co-operation to deal with the emerging and ever-more serious threat of militant Islam.

With the threat developing both at home and abroad, the EU's role has – to be as temperate as possible – been dangerously myopic. If with the aid of Blair it continues to expend its energies on play acting on the "world stage" instead of mobilising our resources to deal with a threat to the very fabric of our civilisation (what is left of it), we will have the dubious pleasure of seeing a man who has fatally weakened the UK go on to repeat his fiasco on a global scale.

But then, if Caligua could appoint his horse as a Senator of ancient Rome, it seems appropriate that we should see a horse's arse appointed as Emperor of the new Rome. If we really want failure, it may as well be spectacular.