On the streets of England? 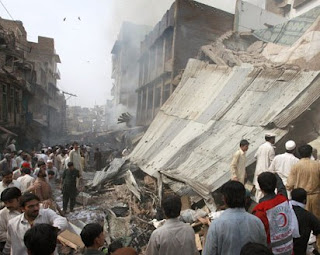 There is an interesting analysis by Jeremy Page in The Times, on the Kabul attack on the UN hostel.

Page thinks the Haqqani Network is the most likely culprit, and the operation certainly seems to have their fingerprints. This, of course, is the organisation based in Miranshah, in North Waziristan, slated as "good Taleban" by the Pakistanis (a ridiculous description), meaning that their efforts are focused on Afghanistan rather than on creating mayhem in Pakistan.

What Page notes, though, is that the attackers in Kabul used similar tactics to their Pakistani counterparts, apparently disguising today's attackers with police uniforms, and using a combination of gunmen and suicide bombers. This points to a closer association between the "Afghan" and the "Pakistani" Taleban than rhetoric would have it.

This is precisely what we were asserting in our earlier piece, suggesting that the distinction was more apparent than real – a convenient artefact, which enable the Pakistani Army to go hunting Taleban in South Waziristan, leaving the northern agency untouched for the time being.

Interestingly, after writing yesterday that experts were suggesting that the operation in South Waziristan was too thinly resourced to achieve any lasting effect and, therefore, that it was "aiming to fail", we picked up and agency piece today, rehearsing the same issue.

It cites Sameer Lalwani, author of a new report for the New America Foundation, who says there are not enough Pakistani troops to challenge the extremists and building up such a strong force would require huge efforts. His estimate is that anything between 370,000 and 430,000 troops would be needed to take on the tribes and carry out an effective counterinsurgency operation in the region.

Yet The Christian Science Monitor quotes Lalwani, as saying "The most Pakistan could free up from its border with India would be 152,000 more. Cobbling together a force of the needed size would take two to five years." Thus, the growing suspicion is that the Pakistani action is largely "cosmetic".

With the massive bombing in Peshawar (pictured), on top of the recent spate of terrorist attacks in Pakistan, Max Fisher over at AtlanticWire blog pulls together a compendium of commentary from the region. One commentator puts the case for the fighting in the tribal areas spilling over into the rest of Pakistan, leading to a full-scale civil war and the demise of Pakistan as a state.

The instability in Pakistan, and the scale of the violence, somewhat relegates Afghanistan to the level of a second-order problem, but it raises the interesting question as to whether our attempts at "nation building" in Afghanistan are actually responsible for triggering the even bigger problem in Pakistan, where we could be witnessing the collapse of a nation.

From a domestic (UK) point of view, the growing instability in Pakistan has massive implications. Already under strain from Moslem immigration, much of it from Pakistan, with a growing and highly voluble fundamentalist faction, civil war – or something approaching it – this could trigger another wave of immigration, which would be hard to contain. Current EU rules would prevent us from excluding members of extended families, which collectively could number hundreds of thousands.

And, with regional passions high, we could see the various factions fight out their battles on British turf, the violence spilling over into the streets of England. Kabul and Peshawar may seem distant but this is the "global village" in practice, with faraway events, and policies of which we take little notice, coming back to haunt us in unpleasant and dangerous ways.