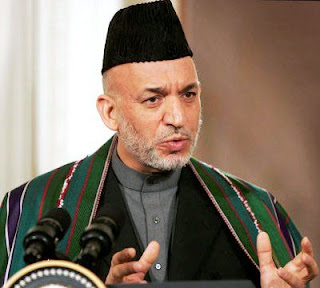 With all eyes on South Waziristan, Afghanistan - for a short while, one presumes – has become almost a side-show, even more so the machinations of that sad little tribal leader Hamid Karzai and his bid to stay on the gravy train.

However, the Karzai situation is coming to a head, with diverse reports recording that the UN-backed Electoral Complaints Commission (ECC) has pulled the plug on his vote-rigging supporters. It has downgraded his share of the vote from 55 to 48 percent, upping the share of his main competitor, Dr Abdullah, from 28 to 32 percent.

This means, according to the rules, there must be a run-off but, as might have been predicted, Karzai is digging his heels in and refusing to accept the result. Even though a run-off is the last thing his Western paymasters actually want, such is the fantasy land in which he and his supporters dwell that Mohammad Moin Marastyal, an Afghan MP and leading Karzai supporter, claims the commission has "twisted the facts" in a deliberate attempt to trigger a run-off vote.

This is not yet the last stage of this current drama though. Procedurally, the ECC delivers its report to the Independent Election Commission (IEC), a body notionally appointed Karzai as a sop to the idea that as president, he actually exercises sovereignty on behalf of the Afghan people.

In theory, it is the final arbiter of the election results and must declare a result. But the ECC has "ordered" the IEC "to invalidate a certain percentage of each candidates votes in six separate categories". The IEC is expected "to implement those orders with haste and move swiftly to issue the final certified results or the need for a run-off as required by Afghan electoral law," says Aleem Siddique, a spokesman for the UN in Kabul.

Where we go from here is anyone's guess but, whatever the final outcome – which looks a long way off – the whole electoral process is irrevocably tainted, and Karzai is holed below the waterline. Even in the unlikely event that he could rally the nation behind him, he has lost the trust of the "international community", whose money, troops and bodyguards have kept him in power.

Already, the shock waves are beginning to be felt in Kabul with White House chief of staff Rahm Emanuel warning that president Obama is minded to delay a decision on committing up to 40,000 extra American troops to the conflict. He prefers to wait until the election crisis pans out and it becomes clear whether there is "an Afghan partner" worth fighting for.

Even if this does play into the hands of a president who is fast becoming known for his indecision, Obama does have a point. The whole concept of a counter-insurgency campaign rest on the fiction – honoured more in the breach than the observance – that the military is acting in support of the civil power.

With a tarnished and weakened figurehead, even the fiction is hard to sustain, framing the coalition military activities in their true light – a multi-national occupation force, bolstering a puppet government for its own ends. That is something the Taleban and the so-called "anti-Afghan forces" will be – and have been – quick to exploit.

How precisely we got ourselves into this mess is relatively easy to see – albeit that hindsight affords a certain clarity. Unwittingly, the Independent's Kim Sengupta puts his finger on it, writing in his "analysis" that the elections held in Afghanistan in August "were meant to show how democracy has taken root in the country since the overthrow of the Taliban."

The essential flaw was (and is) the delusion that "democracy" in any shape of form had taken root in Afghanistan, and thus the belief that this second presidential election could or would be a continuation and a strengthening of the process imposed by the international community when Karzai was first elected president in 2004.

Although the structures of a western democracy were imposed, giving Karzai the superficial appearance of a democratically elected president, he retained the mindset and mores of the man he had become, a tribal chief in what is essentially a pre-feudal society. And, in the traditional manner of such, he did what any tribal chief would do in power – he used the resources and apparatus of the state to strengthen his power base, rewarding his allies and forging new alliances.

Sengupta remarks of the current election round – apparently with some surprise – that "instead" (of following the model of a western election), "the polls became mired in massive fraud". Rather than the word "instead", however, he should have used the word "inevitably", as no tribal chief was ever going to give up power voluntarily or take the chance of losing it.

For our brave reporter then to suggest that "this reopened historic, ethnic and political divisions", is almost laughable for its naivety. Those divisions were never "closed" – they are there and have always been there, and are driving the political process, as they have been throughout Karzai's administration. To complete his fog of incomprehension, though, Sengupta observes that this has "led to questions about why Western troops are being sent to fight and die for a seemingly corrupt and cynical government."

Therein lies the core delusion. Karzai's government, in its own terms, is neither "corrupt" nor "cynical". As its president, Karzai has simply been following traditional precepts, acting in accordance with the mores and norms of his tribal society. And if he was to be "democratically" replaced tomorrow, his successor would behave in exactly the same way.

It is into this "quagmire", of course, that British and other coalition troops have been pitched, but what we are beginning to see is that the true "quagmire" is the intellectual swamp. It is that which has trapped the western powers into their current impasse. And, as we can see, their increasingly desperate thrashing is doing no more than suck them deeper into the cloying mud.

UPDATE: Under "heavy international pressure", Karzai has agreed to a run-off. As if he had any option. And as if it was going to make any difference.