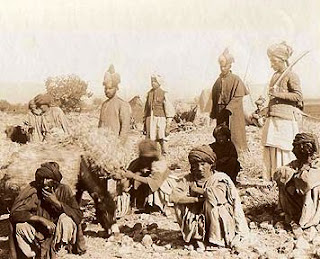 In an effort better to understand the broader sweep of events (or some of them), I have been reading some of the earlier accounts of the campaigns in the Northwest Frontier. This extract from "The Story of the Malakand Field Force", by Winston Churchill (1901), writing of the campaign in 1897, is irresistible:

It is, thank heaven, difficult if not impossible for the modern European to fully appreciate the force which fanaticism exercises among an ignorant, warlike and Oriental population. Several generations have elapsed since the nations of the West have drawn the sword in religious controversy, and the evil memories of the gloomy past have soon faded in the strong, clear light of Rationalism and human sympathy.

Indeed it is evident that Christianity, however degraded and distorted by cruelty and intolerance, must always exert a modifying influence on men's passions, and protect them from the more violent forms of fanatical fever, as we are protected from smallpox by vaccination. But the Mahommedan religion increases, instead of lessening, the fury of intolerance. It was originally propagated by the sword, and ever since, its votaries have been subject, above the people of all other creeds, to this form of madness.

In a moment the fruits of patient toil, the prospects of material prosperity, the fear of death itself, are flung aside. The more emotional Pathans are powerless to resist. All rational considerations are forgotten. Seizing their weapons, they become Ghazis--as dangerous and as sensible as mad dogs: fit only to be treated as such. While the more generous spirits among the tribesmen become convulsed in an ecstasy of religious bloodthirstiness, poorer and more material souls derive additional impulses from the influence of others, the hopes of plunder and the joy of fighting.

Thus whole nations are roused to arms. Thus the Turks repel their enemies, the Arabs of the Soudan break the British squares, and the rising on the Indian frontier spreads far and wide. In each case civilisation is confronted with militant Mahommedanism. The forces of progress clash with those of reaction. The religion of blood and war is face to face with that of peace. Luckily the religion of peace is usually the better armed.

Considering that we are, over 100 years later, confronting exactly the same issues, it is quite remarkable how little things have changed. Each generation thinks it has the answers, each generation feels the need to reinvent the wheel. And for each generation, the old "fuddy duddies" of the past have nothing to offer them.

For all that though, one thing has constantly held in our favour. "Luckily", writes Churchill, "the religion of peace is usually the better armed." Long many it remain so.