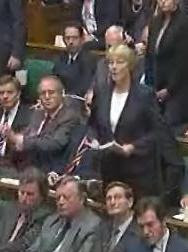 So it came to pass that Ann Winterton won the parliamentary lottery and got to ask the first question at PMQs today. She chose to ask the prime minister:

The prime minister replied: We joined the European Union in the 1970s, and we hold by our obligations to the European Union, but that does not prevent us from representing the national sovereignty of this country.

Unfortunately, the "mice" got at the question in the early edition (on-line), with the Hansard converting the "European Council" into "Council of the European Union", which is the current name for the Council of Ministers.

As originally recorded in Hansard, therefore, the question did not make sense. The "Council of the European Union" (aka Council of Ministers) was one of the original community institutions, set up by the Treaty of Rome. The European Council – starting as an informal meeting of the heads of states and governments – did not exist then, and has never formally been integrated into the community structure, until now.

Having now checked the original video recording, Ann most definitely said "European Council". For some bizarre reason Hansard had changed what she had said. To the spoken version though, Brown's answer was revealing – as much for what he did not say as what he did.

"Will the Prime Minister confirm that he [as a member of the European Council] is bound by its rules, and is thus obliged to further the objectives of the European Union in preference to those of the United Kingdom?" he was asked. Did he answer the question?

What he does tells us is that: "we hold by our obligations to the European Union". Yet the constitutional Lisbon treaty will amend Article 9 of the TEU to incorporate the European Council as an institution of the Union. As such, it:

... shall aim to promote its values, advance its objectives, serve its interests, those of its citizens and those of the Member States, and ensure the consistency, effectiveness and continuity of its policies and actions.

But, what of the question of whether advancing the objectives of the EU and serving its interests takes precedence over serving the interests of its citizens and those of the Member States?

Bearing in mind that the European Council is also obliged to "ensure the consistency, effectiveness and continuity of its [the EU's] policies and actions" – with no mention of member states, where does that leave the prime minister, as member of the European Council?

Answer, of course, there was none. He can represent us ... but his duties and obligations are clear. And, as we all know, EU law takes precedence over UK law. The prime minister, and his successors, are duly obligated to obey.