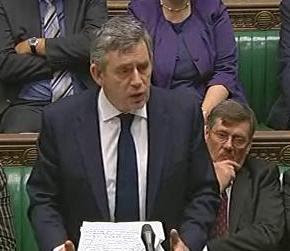 PMQs today were described as "very sombre", with the prime minister opening the proceedings by making tributes to the 37 soldiers killed in Afghanistan since the House last sat. That, inevitably, set the tone for the rest of the session.

Ann Winterton got to ask her question about the constitutional Lisbon treaty and we'll look at that later, when we have the Hansard transcript.

The Guardian covered the session, and missed the point – as you would expect it to – and gave more attention to Tony Wright, (Cannock Chase) who had a "good, pithy question".

What is more dangerous, he asked, politicians becoming generals, or generals becoming politicians? There's a laugh, recorded the newspaper, then telling us: "Brown says he thinks he knows who Wright is talking about and he says he wants to thank Sir Richard Dannatt (who has just joined the Tories) for his service."

You expect stupid questions from politicians, so we weren't disappointed, but to realise quite how stupid, you have to read this.

Interestingly, The Times publishes a poll on Afghanistan today, which records that calls for British troops to leave have risen sharply, standing at 36 percent – up from 29 percent in mid-September.

The poll also asked about attitudes to Dannatt joining the Tory ranks. Nearly half the public (48 percent) believes he was wrong to have become involved in party politics within six weeks of retiring as head of the Army, with 42 percent saying he was right.

However, Tory voters (62 per cent) back him, the only group to do so, which is very illuminating. This is the group you would expect, instinctively, to deplore the blurring of the line between the military and party politics. It demonstrates, more than anything, the power of tribalism and the way it distorts judgement. And we think, compared with the Afghanis, that we're civilised?

Following PMQs, there was a statement by the prime minister on Afghanistan, during which, as expected, the troop level was raised to 9,500. We will also report on this in detail once the Hansard transcript is up on the net.