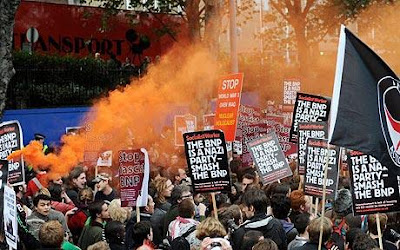 In Nick Griffin, we have a minor and third-rate politician from a no-hoper party with next to no electoral prospects in the UK, a dysfunctional organisation, minuscule membership and precious few funds – espousing an incoherent political doctrine which would fall apart if seriously challenged.

Through the vagaries of the proportional representation system, he has managed to get himself and a colleague elected to the empty posts of the EU parliament members, which has given him a certain status and notoriety, reinforced by the inability of mainstream parties to mount an effective counter.

Taking note of that position, the BBC has invited him onto the panel of a political talk-show, a programme so dire that one seriously wonders why anyone other than the political nerds ever bother to watch it.

The obvious and most logical response is to yawn wearily, let those who care enough to watch do so, in the expectation that, in the light of public exposure, the vacuity of his position will become obvious and his political creed will wither away.

The point, of course, is exactly as we made yesterday. A robust, healthy and self-confident political system could swat aside the likes of Griffin, demolish his political arguments and consign him to obscurity.

Thus, in the category "they doth protest too much", the political claque, in its grossly disproportional response to the BBC programme, is demonstrating not its strength but its own weakness and lack of confidence.

In giving the issue such prominence, the media is also reinforcing another malign tendency – the increasing inability to distinguish between that which is important and of lasting consequence, and that which is ephemeral and of very little importance.

Furthermore, the media and the political classes are displaying another their malign characteristics – over-reacting now, when an earlier and more considered response would have had a greater and more far-reaching effect.

Almost alone of the political blogs, we were writing frequently about the BNP, highlighting what we saw as a serious and important political phenomenon. My writing was misinterpreted by some as expressing support, which was never the case.

My sympathies were and remain with those who feel so alienated from the mainstream political system that they feel impelled to support the party. And that, it seems, is precisely what the political classes cannot deal with. Thus, with their own vacuity exposed, they turn upon the unlikely "boy" who dares remark that the emperor is abroad without his expected attire.

With that, one can only wonder – to the point of despair – about the degradation of our political system. Unlike many hundreds of thousands, or even millions, I will not be watching the BBC programme. Apart from the occasional glimpse at the news, I have long since stopped watching the BBC – and television in general. This programme is no good reason for changing that happy arrangement. I have better things to do with my time.

Instead, almost by way of protest, I am putting this up early, as my overnight post. With all the important things going on in this world, I can scarce contain my disgust at the appalling bad judgement, not of the BBC but of the media and the political classes in propelling Griffin to the top of the political agenda, while – as always – ignoring issues of so much more importance.

If this is what political discourse has come to, I am not that sure I want to be part of it any more.