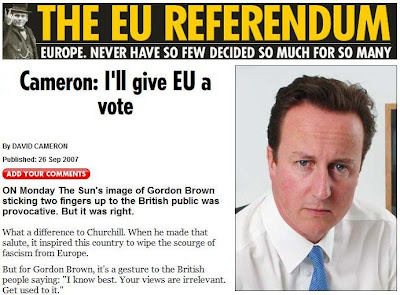 Paul Waugh in his blog, for the Evening Standard confirms that which we have been long expecting – that the Tory leader is to announce that he will abandon his own pledge for a referendum.

Waugh thus reminds us of the pledge David Cameron gave us, in The Sun in September 2007:

Today, I will give this cast-iron guarantee: If I become PM, a Conservative government will hold a referendum on any EU treaty that emerges from these negotiations.

Now, of course, that Cameron is being called upon to deliver, he suddenly finds that it is inconvenient to honour his pledge. Instead, we may expect a torrent of extruded verbal material, telling why it is no longer a practical proposition to hold a referendum.

By this means will Cameron demonstrate that he is the consummate politician. His word, his pledge, is meaningless. We will say what is convenient – to him – if he thinks it will buy him votes, and then ditch it as soon as it becomes inconvenient.

He thinks he can capitalise on the wave of loathing for Gordon Brown and the failed New Labour experiment – and that is enough to get him voted into No 10. He is probably right, and on that calculation he feels secure enough to ditch the committed eurosceptic vote. We don't matter to Dave – he can win without us.

So, when Dave stands up for his victory speech, whenever that is, the sub-text will be a message to all of us: "I didn't need you ... you don't matter, and I don't care what you think." In our powerless state, there is very little we can do. But we will not be powerless for ever.