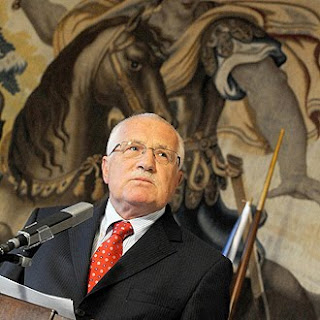 Sooner than he might have wanted, David Cameron is facing the prospect of having to "fess up" and admit that a referendum on the constitutional Lisbon treaty is no longer on the cards.

His nemesis is likely to come some time in early November when the Czech constitutional court clears the way for Vaclav Klaus to sign the ratification instrument, the last of 27 EU member state leaders to do so.

And sign it he will, having indicated to the Czech newspaper Lidove noviny that it would be futile to do otherwise. "The train carrying the treaty is going so fast and it's so far that it can't be stopped or returned, no matter how much some of us would want that," he told the newspaper. (However - see health warning on the forum.)

Although some eurosceptic campaigners have been clinging to the hope that he might delay ratification until the election, thus paving the way for a Cameronian referendum, Klaus made his position very clear by adding: "I cannot and will not wait for British elections, unless they hold them in the next few days or weeks."

Booker, in his column, salutes the man whom he calls "Europe's last democrat". In a melancholy way, he writes, it has been vastly entertaining to see the rage provoked in Brussels and Europe's political class by his continuing dalliance.

Now, though, the game is drawing to a close – a treaty which has taken eight years in the making, built on a foundation of lies, deception and bad faith, rejected by the electorates of France, Holland and Ireland, is shortly to come into force. And Mr Cameron is going to have to tell us what he proposes to do about it.

Philip Davies, the Conservative MP for Shipley, is possibly pointing to a way out for the man who would be prime minister – but in fact will be a satrap of Brussels. He (Davies) says, "If the treaty is fully ratified I have never believed there is any point in having a referendum on it. It would be futile gesture politics." Instead, he wants Cameron to stage a vote on repatriating powers from the EU.

In purely practical terms, Davies is right – but politics is not always about practicalities. Holding a referendum on the treaty would be enormously symbolic, drawing a line between the Labour administration and the Conservatives, and making a powerful statement to Brussels.

Cameron would not, of course, be obliged then to de-ratify the treaty – and nor could he affect its course. By then it would be in force and it would be virtually impossible to unravel the new treaty provisions specifically for the UK.

But, armed with a substantial vote against the treaty, Cameron would have a strong mandate to demand from the other member states an intergovernmental conference (IGC), to which he could present substantive proposals for a new status for Britain, including the repatriation of powers, of which so much has been made.

An alternative course would be for him to set out detailed proposals for dealing with Brussels in the Conservative Party manifesto, with a promise of a referendum to approve whatever deal he manages to negotiate, in the manner of Wilson's 1975 referendum.

Either line, though, is fraught. It is not within Cameron's gift to promise renegotiations. Any substantive changes will require treaty changes and these can only be secured through the medium of an IGC. This requires the "consensus" of the member states, determined if necessary by a vote on which there must be a simple majority in favour.

That, in itself, is a major hurdle. Once an IGC is declared, it is "open house" for any member state to submit their own proposals – many of which have their own agendas and their own publics to satisfy. Given the bruising experience of the Lisbon process, the last thing the "colleagues" will want to is re-open old wounds, and engage in another round of treaty negotiations.

There will, therefore, be massive pressure to refuse Cameron any negotiations. In the face of a "democratic" vote from the other member states (not the EU, but the member states acting – in theory at least – individually), he has no means of forcing the issue, short of invoking the exit provisions of the treaty and taking the UK out of the EU altogether.

Much is made of the ploy of blocking agreement on the multi-annual budget framework, during the forthcoming negotiations. There, parallels are being drawn with the Thatcher "handbag" ploy on the rebate negotiations. But that is a non-starter. Community law simply does not permit treaty changes without an IGC, so Cameron could not trade what we wanted against approval of a new budget framework.

That leaves Cameron with few options. But, if he is prepared to play the exit card, the "colleagues" may well concede an IGC. Even then, there would be massive hurdles. Any changes will have to be agreed unanimously and, once again, the new treaty will have to be ratified by all 27 member states. That will not necessarily be problem-free.

From start to finish, the process could well take several years and one does not have to be a mind reader to see that, from Cameron's point of view, this would be highly undesirable. The last thing he will want is for his first term to be dominated by bickering – and that it would be – over "Europe".

Given also that Cameron's preferred position is active membership of the EU, his position will almost certainly be to seek a de minimis resolution, which can be concluded as fast as possible. Thus, one possibility is that he will offer largely cosmetic changes, sufficient to convince the electorate that he is "doing something" about "Europe".

He could, as a result, try for something like an "Irish option", extracting from the "colleagues" a number of declarations, which could then be incorporated in one of the accession treaties which may come up.

However, he has also to satisfy the "eurosceptic" wing of his party and keep his europhiles on-side, giving him perilously little room for manoeuvre – even less if public hostility to the EU forces him to make more robust changes than he would prefer.

Ideally, Cameron would like to "park" the whole issue – that has been the default tactic of his leadership to date, but in the face of his oft' repeated mantra that, if the treaty is ratified he "won't let matters rest there", he will shortly be forced to make his position clear(er). Even then, he could simply delay the evil day, promising only to set out his plans in his manifesto.

Tory MP Philip Hollobone, though, states the obvious – of which Cameron will be keenly aware. "Everyone will be expecting clarification of what the Conservative position will be," he says, adding ominously, "the issue of Britain's relationship with Europe is not going to go away."

Moreover, Cameron will not get away with a 1975-style Wilsonian fudge. The EU is far more powerful and visible then it was then, the electorate is that much better informed and, of course, there is the internet. "Europe" most definitely is not going to go away, and the prime minister in-waiting has a real problem on his hands.