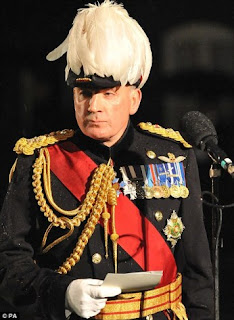 For a news event to break mid-week and then to continue in the media, culminating in making the lead editorial in The Sunday Times, with major comment pieces in other newspapers, says something of its importance.

On the face of it though, the appointment by David Cameron of the former CGS, General Sir Richard Dannatt, is not that important. But, clearly, the media thinks otherwise – and they are not wrong. This affair shines a bright light into the heart of the Cameron project and highlights a deep, structural flaw which could be its undoing. It really is that serious.

The affair also serves to identify a fault line in our own society, separating those who take the event at its apparent face value, applauding the "brave, honest general" and those who see in it a grave and disturbing development, and judge it to be a major error of judgement on the part of David Cameron.

Into that latter category clearly falls The Sunday Times leader, all the more remarkable for the fact that there are plenty of "hot issues" which it could have addressed at the end of the political conference season. Thus to run a headline: "General Sir Richard Dannatt affair is a self-inflicted Tory wound" is significant.

Without retailing at length the text, suffice it to say that the paper believes the appointment to have been correctly defined by Chris Grayling as a "political gimmick", concluding that, "This unfortunate PR stunt was a reminder that there is still plenty of spin around and Mr Cameron should instead concentrate on the straight ball."

Not only is it a mistake, says the paper, "In fact it is so crass it is hard to believe that the usually deft Conservative party could have made such a mistake." Rarely does one get that degree of unequivocal, direct condemnation, the like of which should make even the most hardened Cameron supporter stop to think.

Regular readers of this blog will be well aware of our own antipathy towards David Cameron and also to our deep distrust of Gen Dannatt. In this affair, the two personalities come together and one would expect, therefore, for us to make a meal of it.

Stepping back and looking at Dannatt, though, our distrust of the man was neither instinctive nor personal. After all, we do not know the man and, from what we hear from his close associates, he is in his own terms and by his own estimation a deeply honourable man.

But, in his famed "honesty and integrity", Charles Moore had a pertinent observation yesterday when he noted that "he (Dannatt) has that problem, quite common among evangelical Christians, of not thinking clearly about the effect of what he says. The Biblical text about needing the wisdom of the serpent is one they tend to skip."

Actually, there is something akin to obsessive compulsive disorder in the General, with his obsessive truth-telling (or what he believes to be the truth), leading him to tell the media that Cameron had approached him for help because the Conservative leader's team "lacked expert understanding" of defence.

At a stroke, says The Sunday Times, General Dannatt undermined his future colleagues and left the Conservative leader with the task of smoothing the bruised egos of Liam Fox, the long-standing shadow defence secretary, and other shadow ministers.

However, the more pertinent observation comes in the Mail on Sunday which retails the view of an anonymous "senior officer" who describes Dannatt as "the last of the Cold War warriors who believe in heavy metal gear to fight a world war ... He supports those who want to go back to the age of massive pieces of kit and set-piece operations, but that would be a grave error."

This encapsulates if not completely defines our concerns about Dannatt. At the time when the CGS took office, we were embroiled in a vicious counter-insurgency in Iraq for which the Army was ill-equipped, poorly structured and lacking entirely an appropriate doctrine. Yet, as we observed time and time again, Dannatt chose to make his number one equipment priority the procurement of FRES, offering right up to the end an incoherent view of current campaigns, having entirely failed to sponsor an all-embracing doctrine.

We have taken a great deal of flak for our stance on Dannatt but, as is beginning to emerge, this one man – more than any – held the Army back and prevented it evolving to meet the threats first in Iraq and then in Afghanistan. Thus, while we saw recently Blair being snubbed for having "blood on his hands", that epithet could apply equally to the "soldier's general". He has left "his" Army fatally ill-prepared to deal with the threats it is encountering in Afghanistan.

However, this is not so much about Dannatt as Mr Cameron. The Mail on Sunday retails the observation that "Cameron has chosen the wrong man." And indeed he has.

If the leader of the opposition wanted a man to advise him – or his team – on how effectively to conduct military operations in Afghanistan (notwithstanding the overall strategic framework), Dannatt is the last man he should have chosen. He is neither expert nor current in counter-insurgency tactics and equipment and has a recent and demonstrable track record that testifies to a failure to deal with these issues.

It was not only the fact of making the wrong choice though. This is about how he went about making that choice. Clearly, Cameron did not consult his wider shadow team or keep them in the loop as to his intentions. And while even Max Hastings concedes that that Dannatt is "a controversial figure among his own tribe," if Cameron did take soundings on the general's competence, he must have ignored them.

This in many ways defines the Cameron "project" - a tight, exclusive, self-referential circle which rejects outside ideas and influence, blindly following its own agenda.

The great problem now is that Cameron is saddled with an advisor who, with his high profile, must be taken note of, yet is the wrong man for the job. Says Hastings, "A heavy shadow hangs over British defence policy-making, which is deepened by the Dannatt appointment." He thus writes that Dannatt, in accepting the appointment, has shot himself in the foot.

But, in making such a "crass" mistake – for which he must take personal responsibility – Cameron has shot himself in both feet.