United in a common cause 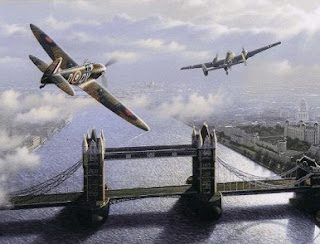 We learn from diverse sources that the Luftwaffe is to join the RAF in a fly-past over London next year to celebrate the 70th anniversary of the Battle of Britain. The symbolism is of rapprochement but it should not escape notice that, with the constitutional Lisbon treaty in force, there is a deeper symbolism.

The Luftwaffe, flying free rein in our skies, will be a fitting and timely reminder that Germany has finally achieved, through the European Union, that which it was unable to achieve through force of arms – the subjugation of Great Britain.

The RAF may fly alongside, but the national symbol of the roundel which graced WWII aircraft will be meaningless. We will no longer be an independent state – not that we have been for some time, but the current treaty is the coup de grace.

Of course this sounds terribly melodramatic, and I have never been one for Nazi conspiracy plots as the genesis of the EU. The fact is that Germany too ceases to become an independent state, alongside the other 26 nations of the EU, including ourselves. Formally, we become provinces of the Greater European Empire, our capital in Brussels, our supreme court in Luxembourg and our peripatetic parliament dining variously in Brussels and Strasbourg.

By then, we will have a new provincial governor, a man by the name of David Cameron. He will be allowed to keep the title of prime minister, although his true role is that of a member of the European Council, presided over by the new Emperor of Europe, to whom he will be responsible, de jure as part of the UK's treaty "obligations".

He may occasionally report to the toothless, neutered Westminster parliament, stuffed with "Cameron's cuties", but only in the manner of a provincial governor keeping the vassals informed of the diktats of his masters.

And, by this account, Mr Cameron will be perfectly happy with his own subordinate status. Mary Ellen Syon, in her own blog, remarks that "David Cameron's position on the Lisbon Treaty has just moved from the deceitful and ambiguous to the dishonest and contemptible."

With the Czech president ready to sign the thing, she writes, Cameron has been forced to say more than just "we will not let matters rest" if the treaty is in force when and if he becomes prime minister. And what he is now saying, in effect, is that he will not have his government do anything to change the effects of the treaty on Britain.

His line, Syon adds, is not that the Tories will promise to pass a law giving a "referendum guarantee" on all future transfers of power to Brussels. There are about three big things wrong with that statement, she says, but start with number one: it implies that the transfers of powers to Brussels in the Lisbon Treaty and early treaties should therefore stand. All Cameron is now saying is that he will stop any more shifting.

In truth, we never expected anything else from Cameron. It was always on the cards that he would sell us out, just as has every prime minister from Heath onwards – over 40 years of continuous betrayal.

So, next year, as we gaze into the skies – or peer at the idiot's lantern in the corner of the room – and see the Luftwaffe in flight over London again, we can reflect that we have all been betrayed, the peoples of Germany as much as the peoples of Great Britain.

We need to see the Luftwaffe and the RAF united in a common cause, turning their guns on our masters in Brussels, Whitehall and Berlin. They are our enemies now.