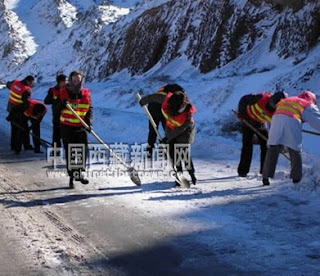 Armed police with 10 snow-clearing machines and vehicles have rescued more than 260 Tibetan villagers and 1,000 head of livestock stranded for at least three days by heavy snow.

The week-long snowfall accumulated to about 30 centimeters in Pulan County of Ali, with some areas suffering meter-thick snow drifts.

Heavy snow cut off the roads connecting some townships in the county and local authorities requested help from the armed police on Sunday.

Nothing special there, you might say – it does tend to snow in Tibet. But, says this report, "local herdsmen in summer pastures were totally unprepared for the disaster with no winter clothes, for it was not yet time to move to winter pastures."

So we have early snow in the United States, in Finland and now in Tibet. Meanwhile, a winter weather advisory is in effect today for most of southern Minnesota and western Wisconsin where 2-3 inches of snow is expected in some areas - in what is being described as "another round of early season snow".

Kent Barnard, leader of the snow clearance team for the "twin cities", says: "This is kind of an anomaly for us; we don't generally get snow obviously this early in the year. Our maintenance crews are ready to go, ready to fight the snow."

Then, the other side of the world, in New Zealand, a "freak snow storm" has left hundreds of people stranded and unable to return to their homes in New Zealand's central North Island. A state of emergency was declared after heavy snow trapped around 700 people in their vehicles on two of the country's major roads.

The bad weather, which the BBC says "is highly irregular at this time of year", has forced many to take refuge in nearby community centres. This doesn't sound much like global warming to me, yet still the idiots blather and blather and blather. We really are going to have to shoot them.