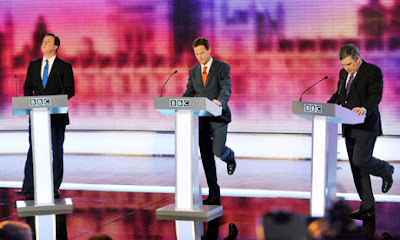 Raedwald is coming up with some interesting ideas on the constitutional shape of the UK, which highlights the potential role of the blogs in shaping our society. For sure, the newspapers are not going to do it, having descended into their second childhood.

"Referism", meanwhile, got a good start yesterday, with a largely positive reception on the forum, with lots of feedback and questions. One issue that emerges, though, is the question of what happens if there is a general election and the new administration immediately thereafter produces a budget. Would there then have to be a referendum?

The problem is obvious because, although the answer has to be "yes", one can easily see the problem of voter fatigue, if there are too many voting sessions – with their attendant campaigns. The answer, therefore, might be to get rid of general elections altogether.

One can imagine here the anguished howls from the political classes, and one could imagine them protesting that such an abolition would deprive people of the opportunity of choosing their government. It is, therefore, an anti-democratic measure.

It must be remembered, however, that we do not vote for governments. We vote for MPs and – as is most definitely the case now – they choose the government, with us currently ending up with one that nobody really wanted. In any case, since our supreme government is in Brussels, and we are not allowed to vote for it - and nor would any vote be meaningful as we do not have a demos – the point is somewhat moot.

Abolishing general elections, though, does not mean abolishing elections. Simply, we work on the basis of individual MPs, who will have individually a five year tenure, and then have to seek re-election. Maybe they could be limited to two terms, but that is another issue for another day.

Over term, with resignations and natural wastage, one could expect MPs to start dropping out of the system for re-election all the year round – although one might not wait for nature and introduced staggered elections. By such means, parliament is constantly reinforced by a steady flow of fresh blood.

Crucially, by getting rid of the "big bang" drama of a dissolution, and the general election cycle, we re-focus attention on what parliament does, rather than on choosing its members. So much of modern politics these days is devoted to the process of election, and the attendant beauty contest. Get rid of this, and the focus is on the annual budget referendum, with the emphasis on what the government does, rather than the pretty (and some very ugly) boys and goils that want to be in it.

As for the MP elections, these – when necessary – are held locally on the same day as the referendum. That creates an interesting situation, with fascinating political dynamics, which need to be explored further. Consider, perhaps, where there is major opposition to the budget. Those candidates who prosper might be those who come up with ideas for a better alternative budget.

These and other issues, we shall continue to explore.