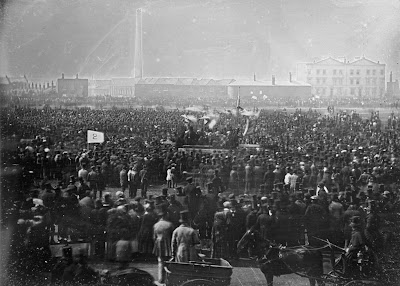 Such was the mood of the nation in the late 1930s that, but for the intervention of the Second World War, we could well have seen a repeat of the great Chartist movement of the mid-19th Century.

The 1939-45 conflict brought with it the promise of "war aims" – rejected by Winston Churchill but embraced by the Socialists and projected as the promise of a "New Jerusalem" after the war ended. But, instead of the promise, the people of Britain got Atlee, partial nationalisation, a sterling crisis, and even more rationing. By 1951, they had had enough of the socialist experiment and voted Churchill back in for a "bonfire of controls".

The burgeoning prosperity of the '60s and led to the tensions of the '70s and then the false dawn of Thatcherism, which led to the belief that the nation had turned the corner – only for the people to discover that first unrestrained capitalism and then failed socialism had been replaced by corporatism, on a national and international scale. Without their even noticing it, the slender gains of the Chartists had disappeared.

One – of six - of the key demands of the Chartists, though – the one which was never granted – was the annual parliaments, a means of presenting the most effectual check to bribery and intimidation. With universal suffrage, no man could afford to buy an annual election.

But, if that was an interesting idea, it was also wrong-headed. As we see now, the greater political and emotional energy is vested in choosing our representatives than is on ensuring the proper administration of the nation. It was not annual elections which were needed but – as we now assert – the annual referendum on the budget.

The Chartist movement was not an immediate success, but it did awaken the interest of the working class in politics, and eventually all but one of the six demands were conceded. But the reforms have run their course.

The elites, having been forced to concede the universal franchise brought about by the suffragettes, have simply moved government up to the supranational level. There, as it was before, it is again out of the reach of the masses and unaffected by the popular vote. We have returned to the situation in the mid-19th century, where disenfranchised masses are ruled by a largely unelected elite.

Hence, we need the revolution which the Chartist movement nearly was, the General Strike of 1926 could have become, and which might have happened but for the war and the 1945 election of the Labour government. Thus, 173 years after the public launch of the Charter – almost to the day (21 May) - we offer our own six aims for a Referist movement:
The Chartists brought their campaign to a head with a massive rally at Kennington Common on 10 April 1848 (pictured). A third petition was then presented to parliament, claimed to hold 5,706,000 signatures, although others claimed it had only 1,975,496 names, with many forgeries.

Then, of course, the Chartists were handicapped by not having the internet. The Holy Gore had not yet invented it. But their great advantage was in not having the BBC. Nevertheless, despite that handicap applying to us, over the next six days I will add more clothes to the six points, ready for presentation of a complete document on 21 May, at a virtual launch.