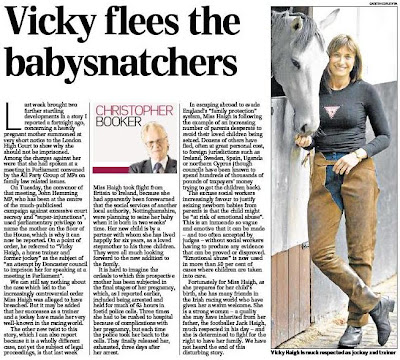 It is a disturbing thought that the greatest enemy is usually the enemy within. It is thus axiomatic that, without the active support of our political classes and civil servants, the writ of the European Union would not hold in this country. Their laws are our laws, enforced by our officials, their designated crimes tried in our courts by our judges, the penalties imposed and enforced by the British system.

To that extent, we have been taken over from within, but increasingly we have to concede that even without the EU, many of our systems of public administration have become seriously degraded.

Not least of those are our social services and their too-often partners in crime, the local police forces and the judiciary. Their increasingly bizarre behaviour brings it home to us that, even were we to achieve the miracle and extract ourselves from the EU, that would only be the start of the process needed to restore equity, sanity and justice to public administration.

Evidence of just how much of a mountain we have to climb (and how much the rot has spread) comes with the travails of the heavily pregnant Vicky Haigh. She has now been named by John Hemming MP, using parliamentary privilege, as the woman who Doncaster social services had attempted to jail for the "crime" of complaining about their actions to a meeting in the House of Commons.

So malign is the grip of the legal-police-social services triumvirate that they even sought to prevent details of Vicky's intended committal being reported by Christopher Booker, thus creating a situation where a free-born English woman can be jailed for an action which is not an offence, and the media is not allowed to report that she has been jailed, or the reason why.

With Hemming's action, Booker is now not only able to report her name, but now she has fled the country, he is able to report some additional detail.

Specifically, he can reveal that Vicky has been forewarned that the social services of another local authority, Nottinghamshire, has been planning to seize her baby when it is born in two weeks' time. Her new child is by a partner with whom she has lived happily for six years, as a loved stepmother to his three children. They were all much looking forward to the new addition to the family.

It is hard to imagine, writes Booker, the ordeals to which this prospective mother has been subjected in the final stages of her pregnancy, which, as he reported earlier (without being able to name her), included her being arrested and held for much of 65 hours in fetid police cells. Three times she had to be rushed to hospital because of complications with her pregnancy, but each time the police took her back to the cells. They finally released her, exhausted, three days after her arrest.

In escaping abroad to evade England's "family protection" system, Vicky is following the example of an increasing number of parents desperate to avoid their children being seized. Dozens have fled, often at great personal cost, to foreign jurisdictions such as Ireland, Sweden, Spain, Uganda or northern Cyprus (though councils have been known to spend hundreds of thousands of pounds of taxpayers' money trying to get the children back).

What Booker's research (alongside Hemming) has also found is the tendency of social workers increasingly to justify seizing newborn babies from parents on the grounds that the child might be "at risk of emotional abuse". This is an innuendo so vague that the charges can be made on the slimmest of evidence, yet judges seem keen to accept them. These grounds are now used in more than 50 percent of cases where children are taken into care.

Fortunately for Miss Haigh, as she prepares for her child's birth, she has many friends in the Irish racing world who have given her a warm welcome. She is a strong woman – a quality she may have inherited from her father, the footballer Jack Haigh, much respected in his day – and she is determined to fight for the right to have her family. We have not heard the end of this disturbing story, concludes Booker.

And never a truer word was written. There is much more to this case than Booker has been able to publish, and he will have to continue chipping away at the edges until the whole story is known and the abuse has ended. But, as with so much else these days, we have dysfunctional systems, causing real hardship and injustice, and no one in authority seems to be able - or willing - to sort them out.

Before we see the end of this, a lot more people are going to have to become angrier and more strident, and more people are going to have to come to grips with quite how badly our systems have decayed. Not until that happens will there be any progress, but the idea that we have secret courts ready to jail pregnant women should be a wake-up call. A system that can do that can do anything. No one is safe.