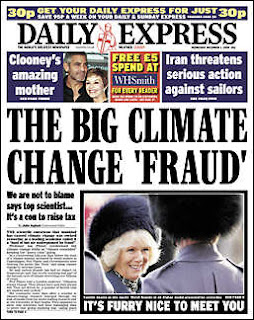 The scientific consensus that mankind has caused climate change was rocked yesterday as a leading academic called it a "load of hot air underpinned by fraud", says The Daily Express.

Professor Ian Plimer, we are told, condemned the climate change lobby as "climate comrades" keeping the "gravy train" going. Governments were treating the public like "fools" and using climate change to increase taxes.

He said carbon dioxide has had no impact on temperature and that recent warming was part of the natural cycle of climate stretching over billions of years. "Climates always change. They always have and they always will. They are driven by a number of factors that are random and cyclical."

You would expect Plimer to say such things, and he will have no immediate effect on the scientific community, or the politics. But the fact that this story is on the front page of a national paper is something of a breakthrough. The first glimmer of light.

CLIMATEGATE THREAD
Posted by Richard at 02:50