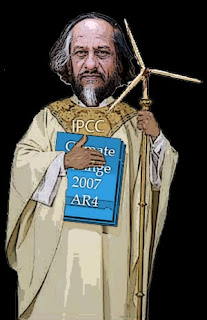 ... says millionaire businessman Dr Rajendra Pachauri in response to our article in The Sunday Telegraph.

"These are a pack of lies from people who are getting desperate," he tells the Times of India. They want to go after the guy whose voice is being heard. I haven't pocketed a single penny from my association with companies and institutes. All honoraria that I get goes to TERI and to its Light a Billion Lives campaign for reaching solar power to people without electricity. All my dealings are totally above board."

The poor man is having a little trouble with setting out his case though. He points out that the previous IPCC chairman was in the World Bank and the one before that was a professor. "Can you then say the university benefited from his association with IPCC?"

And the point is? In addition to his paid post as Director-General of TERI, Pachauri has taken on over twenty additional posts since becoming chairman of the IPCC – another of his paid posts.

As for the link with the Tata group, Pachauri claims, "Our ties ended when Darbari Seth, who was on our board, died in 1999. We haven't received a single penny from Tatas for years and have no ties with them." Which is why, of course, up to January 2003 the "T" in TERI stood for "Tata", only then being changed to The Energy & Resources Institute.

Then, as we recalled, TERI's own communication manager Annapurna Vancheswaran said nothing had really changed. "We have not severed our past relationship with the Tatas. It's only (the change of name) for convenience," was the official line, four years after Pachauri says he has severed all ties with them.

Then there is the little matter of one of the Tata group of companies being listed currently as a corporate sponsor. To add to that, TERI has two ongoing projects with Tata, one which started in January and the other in July, plus eight completed projects from 2001-2007. That sort of suggests not only a link, but an ongoing relationship (screen grab - one of many - below). 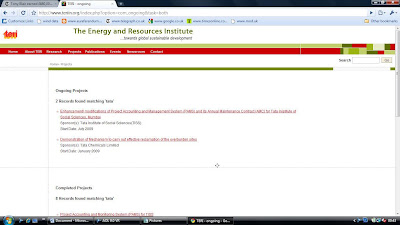 We also have one of Pachauri's other little enterprises, a spin-off called the TERI Business Council for Sustainable Development (TERI-BCSD). Its president is Dr RK Pachauri, its co-chair is Dr J J Irani, described as "Tata Group of Companies". One of the vice-chairs is Mr Homi Khusrokhan, Tata Chemicals Ltd. Its members include Tata Chemicals Ltd, Tata Motors Ltd, Tata Quality Management Services and Tata Steel Ltd.

And who should be on TERI's Advisory Board? Ah! the very same Dr Jamshed J Irani, this time described as Director of Tata Sons Limited, Bombay House, 24 Homi Mody Street, Mumbai – 400001, Maharashtra. Irani is right at the centre of the beast.

Tata Sons, says the company, is the promoter of all key Tata companies and holds the bulk of shareholding in these companies. The chairman of Tata Sons has traditionally been the chairman of the Tata group. Tata Sons is the owner of the Tata name and the Tata trademark, which are registered in India and several other countries. 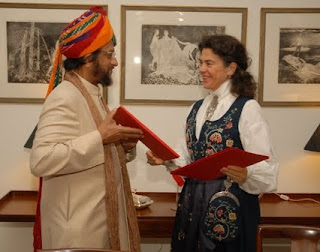 Socially, Pachauri and Tata also seem to get on quite well. On 13 November last year, Pachauri was invited round to the residence of the Norwegian ambassador in Delhi to sign a £6.3 million (60 million Norwegian Kroners) contract between the Norwegian government and TERI. His institute was being hired for five years to carry out work on energy, environment and climate change issues "in partnership with other institutes."

To celebrate, Pachauri, described as "Chair of the Noble Peace Prize-winning, Intergovernmental Panel on Climate Change", and Ratan Tata were guests of honour for the evening at a "Norwegian Creative Experience". Ratan Tata happens to be the Chairman of Tata Sons, the very head honcho, pictured below left being welcomed by Ambassador Ann Ollestad.

Our Dr Pachauri is not only a liar - he is not even a very good liar.

Nevertheless, this does not stop him claiming of us that we "are part of the same vested interest group which hacked the server of UK's East Anglia University." He adds: "They are getting desperate because the world is now serious about moving away from fossil fuels. I want to ask them how much money they spent in the operation? Hacking a server is a costly exercise," he said. 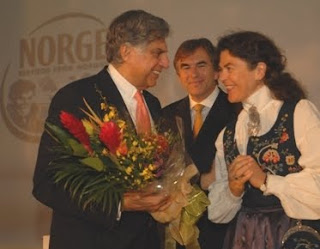 That isn't really worth an answer. It is not us who are desperate. This man is clutching at straws. But he doesn't give up. He argues that TERI submits its yearly accounts to the government under Section 12 of the income tax law. "We fully comply with all government laws," he said.

Pachauri, who recently took up the post of the head of the Climate and Energy Institute at Yale University, then says the appointment was held up for a while because he had insisted that his salary be credited to TERI. "My conscience is clear and that is why I am cool towards these allegations."

That, of course, is a good move. If his Yale salary (which is likely to be at least in six figures) was paid directly to him, he would have to pay US income tax on it. And, as Tony Blair has just found out, the details are then publicly available through the IRS. As it is, he can launder the money through TERI and take the money out of the business in India where there is less scrutiny.

On whether he intends to take legal action against us, Pachauri says he hadn’t made up his mind. "Action against these people only gives dignity to these guys," he adds.

But he dare not. If he chose to sue, we could demand full disclosure of his financial affairs, through the courts. And then the millionaire businessman would have some explaining to do – not least how he is booking his business expenses to the IPCC. And yes, I do have the evidence.

Up yours, Pachauri, you are a thief as well as a liar.

PACHAURI THREAD
Posted by Richard at 08:57