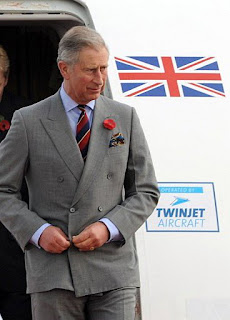 After flying in on his personal RAF jet to the slugfest at Copenhagen, the Prince of Wales sternly warned that the world has only seven years before climate change causes a "point of crisis" that will drive food shortages, terrorism and poverty.

Mark Lynas of The Independent is not sanguine about a "success" though." At this rate, Copenhagen will be a disaster," he says.

With just hours left before the "high-level" segment (with ministers, and – increasingly – heads of state themselves) begins, several different texts were in circulation, all laden with square brackets (indicating disagreement) around even minor issues of contention that should have been resolved last week.

But he's looking in the wrong direction. The Times has a better picture. "The United States will be allowed to buy its way out of adopting a more stringent target on cutting greenhouse gas emissions in a compromise being brokered by Britain," it reports.

President Obama, we are told, is unlikely to increase his previous weak offer on emissions when he joins the Copenhagen climate change summit on Friday. He will instead be expected to make a significant financial commitment to a global climate protection fund.

That is what it is all about. Even if the emission targets on the table were adopted – which they won't be – all but the kindest critics claim that they will not contain the supposed 2°C global temperature increase (as measured by CRU and others).

The clue is in the statement from Ed Miliband, who is braving the snow over at the slugfest. "Countries have to do what they are able to," he says. "I think we have to judge what everyone has to offer in the round. For developed countries, both the [carbon reduction] and the finance they provide is crucial."

Rather like development aid, this "finance" goes to a comparatively small élite, the new "carbon barons". Miliband's "compromise" – or something very like it – will send them away happy. There will be ritual grumbling and the greenies will be furious, but as long as the revenue stream is protected, Copenhagen will have served its purpose.

Then, amid the flurries of snow and recriminations, this long-drawn-out and expensive farce can enter its next phase.

CLIMATEGATE THREAD
Posted by Richard at 00:34