"Global warming to hit Pyrenees resorts," screamed the headline on 18 April 2008. This was a study from Spain's CSIC scientific research agency, which breathlessly declared that ski resorts in the Pyrenees between Spain and France could be badly affected by climate change this century as the warmer weather melts the snows.

Temperatures in the mountain range will increase by between 2.8 and 4.0°C between 2070 and 2100, said one of the "experts" behind the study, Juan Ignacio Lopez Moreno. "Because of global warming, the ski season will begin later and the spring thaw will come up to a month earlier," he said. "What is snow today will be rain tomorrow." 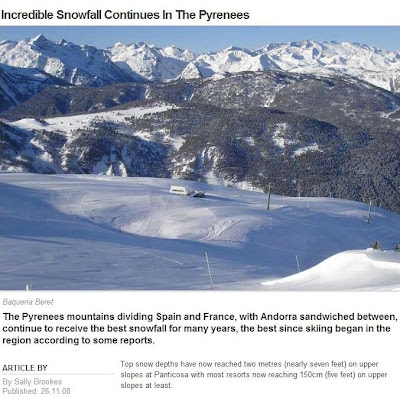 "There has been two days of continuous snowfall bringing from 30 to 80 cm (12 - 32 inches) of fresh powder in the Pyrenees and the Cantabrian mountains of Northern Spain," said Skiinf's regional manager for the area, Prof Dr Raúl Revuelta Carbajo.

For the Spanish Environment Ministry, though, such inconvenient facts troubled it not. By 25 February 2009 it was happily reporting: "Glaciers in the Spanish Pyrenees Melting Fast" and "Further loss of ice could be catastrophic."

The Pyrenees had lost more than 90 percent of their ice during the 20th Century, and if the current global warming trend continued, the remaining 10 percent of ice could disappear within a couple of decades, said Miguel Frances, coordinator of a new study.

Yes, "last year there was a lot of snow," admitted Frances. "This stabilized the glaciers but they did not grow." He then confidently asserted: "We need 20 winters like this one, which is a one-off." 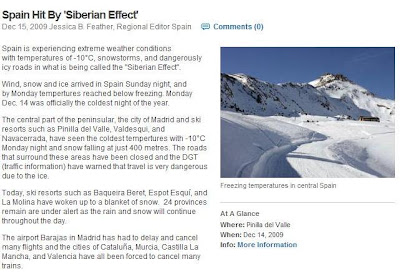 But so much for the "one-off". By 15 December, the headline read: "Spain Hit By 'Siberian Effect'." Spain was in the grip of extreme weather conditions with temperatures of -10°C, snowstorms, and dangerously icy roads in what was being called the "Siberian Effect". Wind, snow and ice had arrived in Spain on the Sunday night and by Monday temperatures had dropped below freezing. Monday 14 December was officially the coldest night of the year.

Ski resorts were amongst those to experience the coldest temperatures. Snow fell at just 400 metres. The roads surrounding the areas had been closed.

And how many more "one-offs" do you think we need before the warmists are a laughing stock?