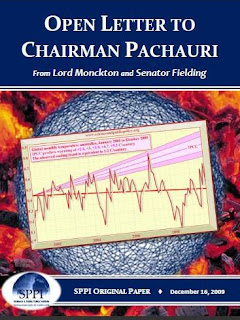 The Viscount Monckton takes Dr Pachauri apart, in long, bleeding strips – analysing his performance at the slugfest at Copenhagen. A report is over on WUWT, detailing the basic errors and unsupported assertions made by Pachauri in his presentation. The presentation is to be commended for its brevity and clarity, easy for the layman to follow.

Monckton, with Australian Senator Steve Fielding, then follows through with an open letter to Pachauri, drawing attention, in some detail, to his conflicts of interests - some of which may be familiar - arising from his extra-mural activities.

On the basis of these very substantial conflicts - which are quite staggering for a supposedly impartial public servant (which is what UN officials should be), the pair write:

We have looked for your declaration of these interests in the documents of the IPCC, particularly in its 2007 Fourth Assessment Report, but we have not found them.

Our conclusion is that you have numerous substantial direct or indirect vested financial and commercial interests profiting from the emissions reduction processes that the documents produced by the IPCC under your chairmanship have triggered.

Given the mistakes that the IPCC have made, they conclude, "and given your numerous and direct conflicts of interest that have, in our opinion, been insufficiently disclosed," they have copied their letter to the delegations of the states parties to the UN Framework Convention on Climate Change with a request that he be "stripped of office forthwith."

PACHAURI THREAD
Posted by Richard at 10:59