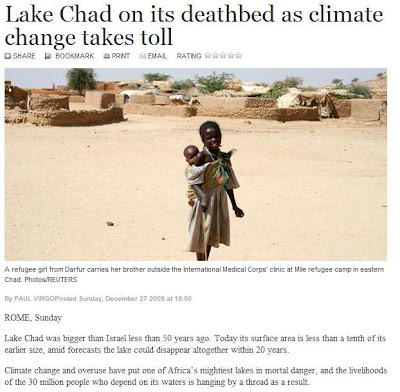 "Breaking news" in Kenya's The Nation today tells us that Lake Chad was bigger than Israel less than 50 years ago. Now, we aare told, its surface area is less than a tenth of its earlier size, amid forecasts the lake could disappear altogether within 20 years.

And, of course, the cause is ... climate change, with a walk-on part for "overuse". These factors have put one of Africa's mightiest lakes in mortal danger, and the livelihoods of the 30 million people who depend on its waters is hanging by a thread as a result. 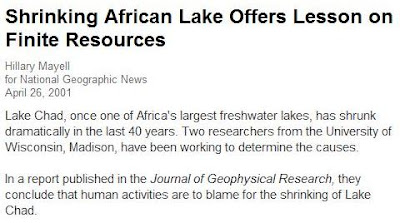 The National Geographic News for 26 April 2001, however, had a slightly different story, recording how two researchers from the University of Wisconsin, Madison, have been working to determine the causes of Lake Chad's shrinkage.
In a report published in the Journal of Geophysical Research, they concluded that human activities were to blame.

Interestingly, Pajamasmedia notes today that, in the year Obama was born, Kenya had higher per capita income than South Korea. The reasons for this and the current situation with Lake Chad are not entirely unrelated.

The one thing for sure, it is not currently, lack of water. Even the BBC admits that "other factors" include "irrigation and the damming of rivers feeding the lake for hydro-electric schemes."