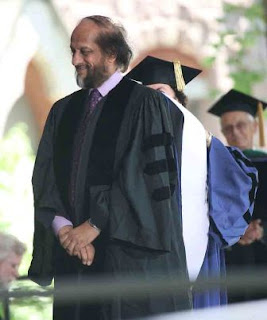 Following our publication of details of some of Pachauri's earnings, gleaned from an Indian newspaper, we attributed some $300,000 income to which Pachauri had admitted.

However, now we have seen the original copy of the press release issued by TERI, it seems we may have significantly underestimated even that amount. In the entry for Yale University, we see the sum of $48,750 declared. But alongside this, we see the legend: "Monthly payments received upto (sic) 30th Nov 2009."

There is an element of ambiguity here, but the $48,750 could either be the total payment from Yale, or it could be the monthly payment. If it is read as the latter – which is how it actually reads - that would produce an annualised figure of over $500,000 ($585,000 to be exact). This is closer to the sums paid for "star" performers.

The classic example is Tony Blair who was paid $200,000 by the university after a deal to give seminars ten times a year on religion.

Like Pachauri, Blair "laundered" the fee through his own set-up, in this case the Tony Blair Faith Foundation, although he also took a direct fee of $10,000 from the university for a speaking engagement. The balance, after tax, was paid to his foundation.

Certainly, Yale University has enough money in the kitty to pay Pauchari more than half a million a year. The Climate and Energy Institute to which he was been appointed head has been funded to the tune of $3 million, provided by an "anonymous donor," a base on which it aims to build "via private donor contributions."

Who these anonymous donors are, of course, we will never know, which makes the University itself a perfect way of laundering payments to Pachauri. By the time they have been transferred to the university and then TERI, they have passed through two "cut-outs" and are entirely untraceable.

With his Yale fee, though, Pachauri's known earnings are in the $800,000 bracket, and these only cover some of the organizations we named in our article. Add the rest, plus Pachauri's payments from the IPCC, and he must easily be in the million-dollar bracket for his annual earnings. Yet, about how much of that is paid to Pachauri by his own TERI, he remains curiously reticent.

PACHAURI THREAD
Posted by Richard at 14:37