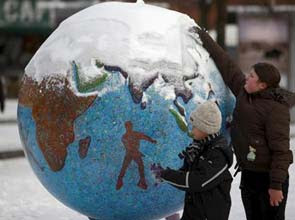 Host Denmark dropped plans on Thursday to propose new draft texts to try to break deadlock at a United Nations climate summit in Copenhagen after opposition from many developing nations, says Reuters.

"The conference is now at a critical juncture and we have now agreed how to proceed," Mr. Rasmussen said. "We now rely on the willingness of all parties to take that extra step to make that deal that is expected of us."

Meanwhile, as the picture delightfully shows, the children were outside cleaning off the global warming from a giant model of the globe.

CLIMATEGATE THREAD
Posted by Richard at 16:51