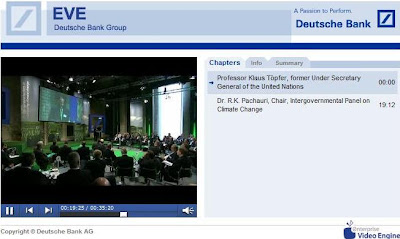 Attendees at the inaugural Deutsche Bank Leadership Forum in Berlin on 4 June this year were there for a specific purpose. Unashamedly, the "DB Leadership Forum", as the Bank likes to call it, exists solely to discuss "Business opportunities in addressing climate change".

Would that they knew it, one of their keynote speakers was a living testament to the "business opportunities" so afforded. This was none other than Dr Rajendera Pachauri, whose TERI business was being paid €100,000 (that we know of) for his membership of the Climate Change Advisory Board of Deutsche Bank. Whether TERI was paid separately for its Director General's guest appearance in Berlin, we have not been told.

However, it would appear that Dr Pachauri is not exactly heavily taxed by his duties for the Advisory Board. On its inception in April 2008, its members were scheduled to meet with the Bank's own Environmental Steering Committee (ESC) twice a year.

We are told also that, in addition to these two main meetings, the two committees conduct an ongoing dialog in smaller committees dealing with specific topics, such as energy efficiency. 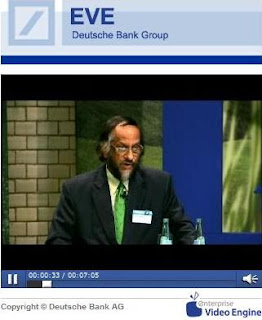 Nevertheless, even the generous payment for Dr Pauchauri's services seems not to have been sufficient for the chairman of the IPCC. For its first meeting on 2 April 2008, according to official UN documentation, Dr Pachauri also claimed this meeting as part of his "outreach" activities on behalf of the IPCC.

To attend this meeting, Dr Pachauri flew 3,676 miles from Addis Ababa to London on 30 March, where the business recorded is the advisory board meeting, a meeting with Mr Caio Koch-Weser vice chairman of the Bank and a meeting with Emma Duncan, deputy editor of the Economist. From there, Pachauri flies – again at IPCC expense – a further 924 miles, this time to Budapest for the 37th Session of the IPCC Bureau on 6 – 10 April.

On the face of it, therefore, this appears to be another example of Dr Pachauri working for his own commercial interests while booking his expenses to the IPCC.

You could, perhaps, take the view that Pachauri's meeting with the Economist's Emma Duncan might have justified the trip – except that Duncan does not seem to have been acting in a journalistic capacity. She is perhaps more concerned with the forthcoming Economist conference, entitled, "The Carbon Economy: New Opportunities for Green Business".

At the time, this was being organised by the Economist, to be held on 17-18 November 2009 in Washington. Pachauri was to be a keynote speaker – his fee is not recorded.

On that day of 2 April, though, Pauchauri, has yet other interests. His separate meeting with Mr Caio Koch-Weser, clearly yields dividends.

Commenting on the partnership, Mr. Koch-Weser says, "I am delighted that Deutsche Bank has joined hands with TERI."

The assiduous courting of Koch-Weser has paid off. Pachauri's meeting with the Bank's vice-chairman on 2 April was by no means the first. They also meet on 3 October 2007, at the international lecture by The Royal Academy of Engineering in London, and also with the Academy president, Lord Browne of Madingley, who is also later co-opted on the Bank's advisory board. Koch-Weser and Pachauri then meet on 17 January 2008, this time at the Carbon Trust Winter Lecture, also in London.

Both of these meetings, incidentally, are claimed as part of the IPCC chairman's "outreach" activities. And, strangely, there is no further record of a Deutsche Bank advisory board meeting until 14 November 2008. We have not yet been advised whether Pachauri claimed the expenses from the UN.

For the record, they do meet yet again, at the World Sustainable Development Forum on 5-7 February 2009, where the Delhi Sustainable Development Summit of 2009 is holding a conference under the title "Towards Copenhagen: an equitable and ethical approach". Koch-Weser, by the way, is chaired by Mr Nik Gowing, main presenter of the BBC World Service.

As for Deutsche Bank, it actually has four billion reasons for its interest in climate change and Dr Pachuari, something which its website so clearly explains.

Having identified climate change as "one of the mega-trends that would drive the global asset management business for the next generation and beyond," it has become "one of the leading climate change investors in the world." As of March 2009, it had approximately $4 billion under its management.

At a mere €100,000 - so far declared - they might think Pachauri comes relatively cheap.

PACHAURI THREAD
Posted by Richard at 00:48