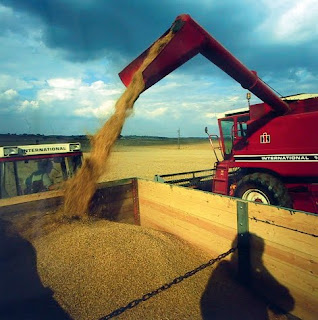 Plaintive little "voices off" at the Copenhagen slugfest are coming from the Food and Agriculture Organization (FAO), in the shape of its director-general Jacques Diouf. He is complaining that talks are neglecting the food crisis.

Instead of concentrating on the industrial policy, he says, the delegates should be looking for measures which can both curb climate change and boost food production. "Roughly around 31 percent of emissions come from agriculture," he says, and changes in husbandry and cropping practices could help reduce those emissions while improving overall productivity.

This has barely created a ripple in the overheated atmosphere of the summit, although we did get lurid headlines from The Daily Mail, telling us that climate change will see a further 100million people going hungry by the middle of this century.

According to its studies, the World Food Programme is saying that the number affected by hunger could rise by between 10 and 20 per cent without action to tackle global warming, with two thirds of the increase concentrated in Africa.

Yet, despite the low-key treatment in Copenhagen, a mere 300 miles north in Oslo, president Obama was taking possession of his Nobel prize, declaring that the world had to come together to confront climate change. "There is little scientific dispute," he said, "that if we do nothing, we will face more drought, famine and mass displacement that will fuel more conflict for decades."

However, if the "big freeze" forecast for next week in Europe is any guide, following on the back of unseasonably cold weather in areas as far apart as the US and Tibet, then the problem is not going to be global warming. The prospect of a significant shortage of food may be real enough, but the greater danger is global (or at least regional) cooling.

Even according to the official record - interpreted by Dr Lucia Liljegren, an atmospheric researcher with the Ames Laboratory at Iowa State University, current temperature levels are even now below the "best-case scenario" postulated by the IPCC (see graph below - the lower of the lines). 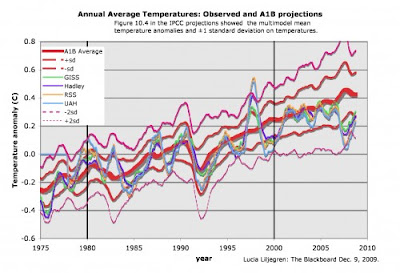 According to Peter Taylor, in his new book "Chill", this is just the start. He maintains the world is cooling. Magnetic activity of the sun – which many to believe to be the real driver of the climate – is at an all-time low. There is a possibility of a repeat of the Maunder Minimum of the 17th century when the Thames froze every winter and famine spread through Europe and China.

Even with the benefit of the recent warming period – and higher recorded CO2 levels which improve plant productivity – the world is already on the brink although the pessimistic forecasts earlier this year did not transpire. Stock levels have sharply rebounded from the 2007-08 record low and are forecast to climb even higher by the end of 2009-10 to stand at around 160 million tons.

This, nevertheless, falls short of the projection this year of an increase in global wheat stocks to 171 million tons. But it is a considerable improvement on 2007, when the world saw global carryover of grain stocks fall to 61 days of global consumption, the second lowest on record (below).

Thus, at present China accounts for around 16 percent of global wheat output, which compares with 20 percent for the EU countries, 11 percent for India and nine percent for the US. However, China only exports around three million tons. Its main effect on the global market is exerted by its own self-sufficiency.

In what is a totalitarian state, where reliable domestic news is hard to come by, there are disturbing indications that this level of production cannot be sustained. 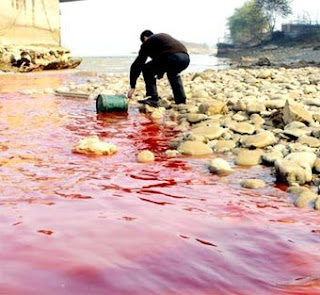 Thus, even without any global climatic effect, there is a distinct possibility – some would say certainty – that China's status as a net exporter of wheat could change – and very rapidly. The largest regional exporter of wheat flour is Kazakhstan, which is also the world's leading exporter of this commodity, supplying 1.85 million tons, ahead of the EU at 1.35 million ton, Argentina and Turkey both at 1.2 million. It is to Kazakhstan that China would likely turn, drawing down product to the extent that it could have a significant knock-on effect on the rest of the world.

But if that is a possibility without any climatic effect, low temperatures could make the situation substantially worse. In the winter of 2007-8, we saw reports of heavy snowfall in China, with severe freezing and substantial crop losses in what was called the "Winter Snow Disaster". Cumulative losses exceeded $20 billion. 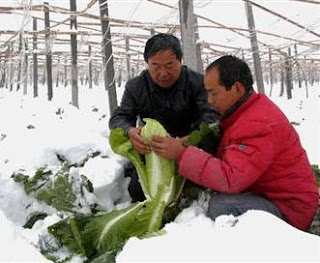 With unseasonably early snow being reported in Tibet this October, and a snow emergencydeclared in November in the north – which had the region's heaviest snows in six decades, leaving 38 dead and thousands stranded – it would be a brave man who would guarantee the current high levels of food production in China.

And what is happening in Asia is being replicated in the United States and Canada. After two hard winters, this year we see again unseasonably early snowfalls. Even yesterday, we were readingthe headline: "Deadly storm sweeps across America". Nebraska received more than 10 inches of snow, the most the state has seen in December for 50 years, and Des Moines, Iowa, recorded its second highest December snowfall – 12 to 15 inches – since records began in 1888.

Importantly, what is missed amongst all the cries of impending Armageddon is that global warming – certainly at the levels experience at the end of the last Century – is largely beneficial in terms of food production, as indeed was the Medieval Warming Period which brought considerable prosperity to Europe. Even at temperatures considerably higher than were experienced in the 1990s, temperate agriculture (which provides the bulk of the global food supply) would remain a beneficiary.

On the other hand. as Taylor points out in his book, natural climate change, especially cooling, is dangerous for the very large numbers of people who are vulnerable to climate change - the urban poor in the developed world, including the UK, plus the poor nations currently dependent on food aid.

Already, global agricultural productivity growth is only one to two percent a year. This is only just keeping pace with population growth and increased demand. But cooling would reduce or even eliminate that growth and the food surpluses upon which we all depend. 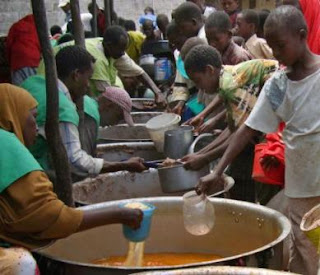 What is more, the biofuels programmes aimed at preventing climate change will expose them to greater risk by decreasing the amount of land available and raising food costs. This problem, coupled with increasingly expensive energy supplies, will affect everyone world-wide and drive up transport and manufacturing costs to levels even rich countries will struggle to afford. The poor will suffer dreadfully.

If this stacks up to an impending crisis, however, for Europe and especially for the UK, it will be unique at several levels. Looking specifically at the UK, it has to be said that agriculture has probably never had such a low profile in the national consciousness.

Even 20 years ago, all the major national newspapers had dedicated farming correspondents. But these have now been replaced by environment and life-style specialists. In the beginning, they did write occasionally about countryside matters and farming. The output, though, has dwindled to the point where routine agricultural coverage has vanished from the dailies. I cannot recall a time when less was written in the media about the subject.

Instead, the focus is on "global warming". Agriculture comes onto the agenda mainly in respect of its contribution to reducing CO2 emissions.

Similarly, we no longer have a Ministry of Agriculture, this having been subsumed in DEFRA – the Department for the Elimination of Farming and Rural Activity, as it has been called. Most people would struggle to name our agriculture minister, and fewer still would have any idea who the shadow minister is. Even fewer, perhaps, actually care.

As for our real government – the one in Brussels – until recently we had the feisty Mariann Fischer Boel who, last time I looked, seemed to have acquired the title, "commissioner for agriculture and rural development". That should tell you something.

Her claimed concern was to "…modernise the CAP and free farmers to respond to growing demand", with yet another "reform" in progress under the disguise of a "Heath Check". It was supposedly part of a package of measures intended to be a "European response to mitigate effects of rising global food prices". As always though, the intent was to reduce direct payments and shift financing to "second pillar" rural development and environment, with a bigger slice of the cash going to non-farming enterprises. 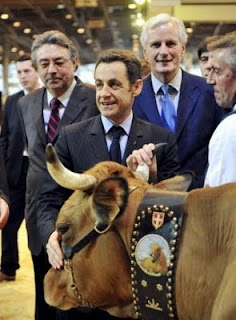 Now, perhaps, the pendulum has swung too far. Sarkozy certainly thinks so as he communes with his new commissioner designate, Dacian Ciolos. Although a Romanian technocrat, he has spent so much of his life studying and working in France that he regards it as his adoptive country. A French EU agriculture minister in all but name cannot be good news for British agriculture.

As for what his policy might be, we have very little idea. For a meeting last week, the French government convened what it called the "G22" - senior ministers from 22 European states - in an attempt to influence a rethink of the CAP.

However, it did not invited Britain or other so-called "reform nations" - the Netherlands, Sweden, Denmark and Malta - all of which have argued for a full overhaul of EU farm subsidies. To this day, we have no real idea of what transpired.

The inherent problem here is that, by design, the CAP is primarily designed to deal with the problem of agricultural surpluses. It is a funding mechanism, not a stock management system – not one ever designed or intended to deal with shortages. In the entire history of the Community, there has never been a situation where there have been food shortages. And now it is to become even more distant from reality as the "CAP budget" is to take on a whole new meaning. Out goes money and in comes "carbon" to create a carbon budget.

Locked into this collective madness, governments have lost sight of one of their primary functions is maintaining food security, part of which is holding reserve stocks of key commodities for times of shortage or emergency. Since the EU took over agricultural and food policy, the strategic direction of those stocks – and their financing – moved to Brussels, where the focus has been anything but food security.

Now, with Brussels obsessed with "global warming", a Francophile at the helm of the EU commission and a policy direction that is, to say the very least obscure, there is the terrifying prospect that the machine is looking in the wrong direction. When or if there is a crisis, we will be singularly ill-prepared. One fears the only response will be "let them eat carbon".

This madness is, on balance, a far greater hazard than anything Mother Nature can throw at us. Farmers over the ages have shown endless creativity, adaptability and resilience in dealing with changing physical conditions. What no one yet has been able to devise is a way of making farming politician-proof. And now we are in an era where state intervention is moving into a new and terrifying dimension, all based on what is most probably a false paradigm.

That is a different crisis, one for which there may be no solution.