Nothing is ever what it seems 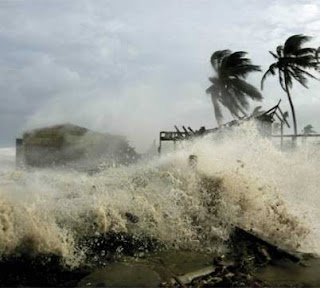 "Natural catastrophes have left the world's insurers with a claims bill totalling $22 billion (£13.7 billion) this year as the number of disasters linked to climate change increased markedly."

So writes Miles Costello for The Times, adding to the steady drip of MSM propaganda to reinforce the proposition that "climate change" – i.e., global warming – is a serious problem.

Yet the source of this information is Munich Re, the German reinsurer. It has issued its annual assessment of catastrophe losses, noting that, although overall losses were dramatically lower this year than last, the number of destructive events was higher than its average over the past ten years.

Spokesman Peter Höppe, head of the company's Geo Risks Research division, is unequivocal. He says: "We should make no mistake: despite the lack of severe hurricanes and other mega-catastrophes, there was a large number of moderately severe natural catastrophes. In particular, the trend towards an increase in weather related catastrophes continues."

Höppe goes on to assert that: "Initial analyses indicate that, apart from socio-economic factors, this is already due in part to climate change," on which basis his company argues that there is an "urgent need" for international agreement to reduce the greenhouse gas emissions that cause climate change.

However, what is lacking entirely from this account is any indication of the Munich Re's motivation for spreading its concerns about "climate change", or any suggestion that it might be a partisan player - at several levels.

In the immediate term, the catastrophe re-insurance market - as Höppe hints - has had a good year, with no major payouts. This is leading to pressure to reduce premiums, so the climate change "threat" is thus being used as a counter - as outlined here.

For the longer term, we have to look elsewhere for the motivation, to the Centre for Climate Change Economics and Policy jointly funded by the London School of Economics, Leeds University, the Economic and Social Research Committee – and Munich Re.

Within that unit we find the Munich Re programme. Scrutiny of this quickly dissipates any suggestion of altruism or neutrality on the part of the company. The heading of the programme is: "Evaluating the Economics of Climate Risks and Opportunities in the Insurance Sector".

Therein, we also see one of the major research packages, which further gives the game away. It tells us that:

Mitigation and adaptation activities will bring about a plethora of new financial products, introducing new risks and opportunities into the financial sectors. This research package will explore the impacts of alternative approaches to carbon finance and emission trading for different industries, informing the design of trading schemes and new financial service products. The second phase of the package will investigate how better balance investment between mitigation and adaptation, survivability and sustainability from the perspective of market participants.

Thus, the very evident concern of Munich Re is to exploit the financial opportunities created by climate change, its enthusiasm for talking up the "threat" clearly influenced by its perception that there are major gains to be made.

The presence of Richard Price from DEFRA is particularly apposite for, alongside him is a now familiar figure, none other than Ritu Kumar, director of TERI-Europe.

TERI-Europe, of course, is carrying out its own study "investigating the exposure and potential of the Indian insurance industry to cover risks related to climate change". This, remarkably, is funded by DEFRA and "links have been established" with Munich Re, as we now see from Kumar's participation on the Steering Committee of the Centre for Climate Change Economics and Policy. This makes for one real busy lady.

But what it also makes is one giant scam. Whatever the original motivation of the climate alarmists might have been – and one can concede that many people have been genuinely concerned about global warming – the issue has now been hijacked by the money men and the financial institutions, who are intent on exploiting the "opportunities" afforded.

PACHAURI THREAD
Posted by Richard at 00:38