What is with the media? 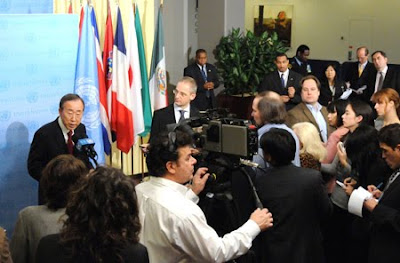 We noted earlier that the New York Inner City Press had quizzed UN Sec-Gen Ban Ki-moon on Dr Pachauri's financial affairs. This was at a packed press conference on the Copenhagen Accord in the UN building, where hundreds of reporters were present. And at least one other picked up the Pachauri story, writing this:

The lack of transparency has been an on-going critique throughout the climate negotiations. On Sunday, the Telegraph reported that the head of the UN's climate change panel, Dr. Rajendra Pachauri, has made a fortune from his links with 'carbon trading' companies.

His worldwide portfolio, which includes banks, oil and energy companies and investment funds heavily involved in "carbon trading" and "sustainable technologies," is estimated soon to be worth trillions of U.S. dollars a year, according to the British newspaper.

As chairman of the UN's Intergovernmental Panel on Climate Change (IPCC), Dr. Pachauri could find himself in a conflict of interest as many of the companies he advises is dependent on the IPCC's policy recommendations.

When asked about the allegations, Ban replied in general terms, saying that businesses are bound to profit from a world-wide agreement on climate matters. "Businesses psychology will shift with this political accord," he said.

"As soon as this climate Copenhagen accord is translated into a legally binding treaty, I'm sure that the business community will shift their business operations towards a green growth economy."

And the source of this report? Ah! The state-owned China Daily press agency, Xinhuanet. No British media organisation covered the story. If you want information, go to Communist China.

PACHAURI THREAD
Posted by Richard at 21:34