More lucrative by the day 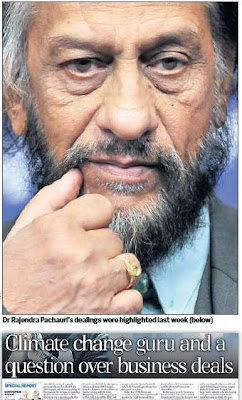 That is the conclusion of the Booker column today, phrased in reference to the increasingly profitable climate change industry.

To get there, Booker brings us up to date (almost) with the latest developments in the Pachauri saga and poses the questions Dr Rajendra Pachauri still has to answer about his extra-mural activities and his private earnings.

There is nothing new, of course, to readers of EU Referendum – and we have a lot more to unravel before we have finished with Dr Pachauri. He very much seems to be in the business of making money out of global warming – even if there has been no discernable warming trend since 1995.

However, this piece is also the answer to Pachauri and his pet company TERI, which has been issuing threats and bluster all week, the latest of which are recorded here.

These have invariably culminated in a demand for an "unqualified apology" from the Telegraph for what is still described as a "libelous piece of journalism", otherwise they will "do such things ..." couched in terms of them preparing to "take recourse to other measures as we consider appropriate and necessary."

Interestingly, despite our piece having been published on 20 December, up to press the paper has heard nothing directly from Dr Pachauri, his institute or any of his associates.

Over term, we have been at the sharp end of any number of complaints and it is extremely rare in our experience to have heard absolutely nothing directly from a complainant after well over a week. This rather suggests that Dr Pachauri is engaging in bluff and bluster for domestic consumption.

However, in describing our report as "a pack of lies" and accusing us of being part of that same "powerful vested interest" responsible for "Climategate", while also demanding an apology, Pachauri is rather climbing out on a limb.

As it stands, we have no intention of making an apology, and he is going to look rather silly when one is not forthcoming. Rather, we intend to use the additional material we have, cementing in the proposition that the chairman of the IPCC is abusing his office, if not for his own personal enrichment, then for the benefit of his institute, over which he has control, and from which he may gain considerable financial benefit.

Nothing has better illustrated that Dr Pachauri has something to hide than his reluctance to publish the certified accounts of his institute, and its many offshoots, or give details of his own personal salary and emoluments while in office. That he should then respond to the charge that TERI's accounts are not published with the claim that they are supplied to the relevant tax authorities is simply laughable.

Pachauri may get away with this in front of a fawning and uncritical Indian and regional media, and he has so far been able to rely on the rest of the British media ignoring the issue. However, as Booker demonstrates today, The Sunday Telegraph is not going to let go. Neither will this blog and many other blogs are joining in the fray – once again they, rather than the MSM are making the running.

By the time we have stitched this together, we will be able to show with some greater clarity the web of corruption and deceit that reaches into the heart of the IPCC and spreads its net globally, lubricated by billions of dollars with the promise of many more to come.

When it is all over though, we should have difficulty in being the least surprised. The IPCC is, after all, a UN institution, the same fundamentally corrupt organisation that brought us "food for oil" and other such delights. That anyone expected "climate change" to be handled any differently, or any less corruptly, should be the only surprise.

PACHAURI THREAD
Posted by Richard at 23:56