They hate humans don't they? 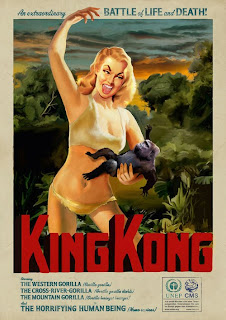 If it wasn't for the fact that they carry the official logo of the United Nations Environmental Program (UNEP), one might have thought Prison Planet was exaggerating.

But this (left) is one of three posters in a new campaign sponsored by the United Nations, depicting humans as evil horror movie monsters intent on slaughtering wildlife. They reverse the roles of famous horror movies Jaws, King Kong, and Tarantula, characterising humans as rampaging monsters out to kill defenceless species.

The posters were produced by the Convention on Migratory Species and, in the one illustrated, we see the beautiful blonde woman recast as a gnarling murderer about to crush a defenceless ape in her hands. The woman is labelled: "The Horrifying Human Being (Homo-sapiens)".

I guess the artwork does not exactly convey that impression, but it certainly does confirm the impression that so many of these "climate activists" are primarily motivated by their hatred of human beings. But that an official UN body should sponsor the posters says a great deal about that organisation as well.

CLIMATEGATE THREAD
Posted by Richard at 19:58