We woz not worng 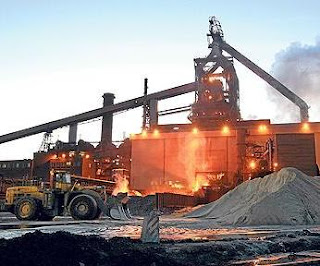 Although it was reported in the Indian Media that the UK government could recover unused carbon credits from the Corus Redcar plant, as subsequent report from Reuters confirmed that this is not the case.

Thus, the essence of our report – which was based on a knowledge of the EU rules – has been proved correct. The Department of Energy and Climate Change (DECC) had indeed said on the Wednesday that the surplus carbon permits - could be auctioned with proceeds going to government coffers. But, as so often, the civil servants had failed to understand the rules.

They were thus forced to issue a humiliating retraction, a DECC spokeswoman writing in a later e-mail to Reuters stating: "We have to follow the legally binding rules under the EU Emissions Trading System (ETS). In this instance, it is not clear that all the ETS activities at the Corus Teesside plant have closed."

And, although the government is only admitting that it will have to give Corus free credits for 2010, this is being a tad disingenuous. Under the amendment to Directive 2003/87/EC, the current allocation round covers the five years from 2008 to 2012. Thus, as the Reuters report concedes, "The Teesside plant is due to receive a further 14 million for 2011 and 2012 if the site's ETS activities continue."

The reference to the "further 14 million" is interesting, as there we have made our one error. We estimated the allowance at 6 million per annum, but in fact it is 7 million. Therefore, over term, Corus will get 21 million EUAs (carbon credits), entirely free of charge.

Reuters values the annual 7 million allowance at €100 million ($147 million), but that is at the current carbon price of just over €14 per ton. There is nothing to compel Corus to sell forward and if as anticipated, the carbon price rises to between £30-40 per ton, then the annual value of the allocation is in the order of £250 million rather than our estimate of £200 million.

Over the three years, that actually makes a potential £750 million for Tara - for not producing steel at the Redcar plant.

However, barring Booker, all of the media reports (and there have only been a few of them) have missed out on the other half of the equation. With a rising steel market and national inventories exhausted, the steel has to be made somewhere.

As we know, Tata (aka Corus) intends to offshore the production to India, where it will be able to claim the Clean Development Mechanism (CDM) allowances for producing steel to exactly the same emission standards as the UK plant it displaces.

By claiming that the plant replaces production in India with higher emission levels – which is not difficult to do as Tata is undergoing a modernisation programme and closing down its less efficient plants (plus one of its own companies runs the approval system) – it can claim the difference, as "Certified Emission Reductions" – more commonly known as "carbon credits", which it can then sell on the open market.

Since Tata's older plants produce roughly twice the emissions of comparable plants in the UK, and the replacement plant will roughly match UK levels, producing the steel in India rather than in Redcar will deliver roughly the same amount of carbon credits as Redcar is able to claim – i.e., about 7 million. That – depending on the prevailing carbon price – gives Tata a bonus of anywhere up to £1.5 billion over three years.

As to who is going to pay this money – the answer is simple. We are. The main enterprises having to pay for their carbon credits are the electricity generators.

Currently, the industry produces over 200 million tons of carbon dioxide and, with the British government looking for at least a 20 percent reduction, it is going to cut the number of credits it sells. The industry will, therefore, will have to look elsewhere for its credits in order to keep the lights on. And that is where the Tata credits come in. They will be sold to the electricity generators and we will pay for them through our electricity bills.

That this is not a major, front-page scandal should be a source of amazement. We are paying an electricity "tax" of the order of £1.5 billion to an Indian steelmaker, for the privilege of have the production in the UK closed down and the work transferred to India.

With a loss of about 5,000 jobs (or more when suppliers, etc., are taken into account) the loss to the UK economy is probably in the order of £500 million a year, plus the tax losses and dole payments will further burden the public purse.

This is economic madness of the highest order, made even crazier by the fact that there will be no overall drop in CO2 emissions as a result of the Corus closure.

CLIMATEGATE THREAD
Posted by Richard at 16:52