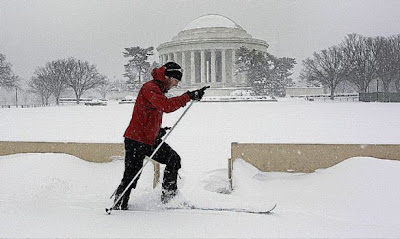 A blizzard-like storm rocked the Mid-Atlantic and Northeastern US states yesterday, crippling travel across the region and leaving hundreds of thousands of people without power, reports The Times.

Five deaths appeared to have been caused by the storm system, which stretched from the Carolinas north to New England and also spread into some Midwestern states. The 16 inches (40cm) of snow that fell at Reagan National Airport outside Washington was the most ever recorded for a single December day, and 16 inches (40cm) had also fallen in Philadelphia.

The National Guard used Humvees to rescue stranded motorists in Virginia and some 500 people sought warmth and refuge in emergency shelters. Nearly two feet (60cm) of snow fell in some areas, and the US capital was under a blizzard warning.