The cracks are showing 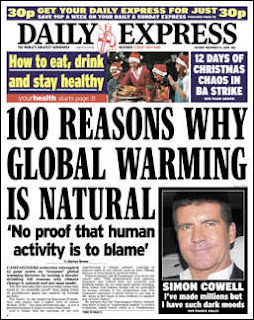 Never mind the quality – feel the width. The Daily Express today offers another front page, attacking Mann-made global warming, following on from its earlier front page at the beginning of this month.

Although the source is the European Foundation - hardly a credible scientific authority - the headline speaks loudest, declaring: "100 reasons why global warming is natural." The fact that the paper was prepared to put it on its front page speaks for itself.

The list, we are told, includes the controversial claim that there is "no scientific proof" that rising levels of greenhouse gases are caused by human activity, while it is also argued (correctly) that a higher level of carbon dioxide (CO2) is not a problem because it helps to boost crop yields.

The Met Office is cited, down-page, rather predictably denying the claims. But there is some clear good sense articulated in the list of a hundred, including references to historic shifts in the climate such as when Vikings farmed on Greenland in medieval times.

Meanwhile, from the slugfest in Copenhagen, it is almost impossible to gain any coherent information, with even The Guardian reduced to reporting a "fraught day". The earlier disputes, the paper says, caused: "the loss of five vital hours of negotiating time". The UN and Danish organisers are now accused of sidelining developing nations by holding informal consultations with selected countries. It is beginning to sound like an EU summit.

And, in a sign of things to come, a "senior Asian negotiator" says: "The disaster has already begun because we have not closed the gap an inch. We have not moved. We are just trying to paste over it with political rhetoric."

As if the summit was not in enough trouble, delegates also had to listen to Al Gore telling them that "new data" suggested there was a 75 percent chance the entire Arctic polar ice cap may disappear every summer within seven years.

He was immediately criticised for "spinning", with The Times recording that the supposed originator of the "new data" Dr Wieslav Maslowski stating: "It's unclear to me how this figure was arrived at ... I would never try to estimate likelihood at anything as exact as this." Gore's office later admitted that the 75 per cent figure was one used by Dr Maslowksi as a "ballpark figure" several years ago in a conversation with Mr Gore.

His speech was roundly criticised by members of the climate science community. "This is an exaggeration that opens the science up to criticism from sceptics," Professor Jim Overland, a leading oceanographer at the US National Oceanic and Atmospheric Administration said.

Perhaps fortunately for him, Gore's audience might have been smaller than anticipated. In a classic PR own-goal, the UN announced that it was permanently banning thousands of accredited non-governmental organizations from the conference centre. But officials waited until several thousand accredited NGO delegates had been forced to wait outside for eight hours or longer in near freezing temperatures for admission.

They were apparently being banned because the UN had accredited 45,000 people for a building with a capacity of 15,000, although the stated reason was "security concerns." Those "concerns" might have been related to the fact that, after waiting several hours in the cold, delegates had begun to chant, "Let us in! Let us in!"

Said one commentator: "To give credentials to 45,000 people while choosing a building that holds 15,000 is insane, though the United Nations, to be fair, has never been known for competence." And these people want us to believe they can save the planet?

CLIMATEGATE THREAD
Posted by Richard at 01:30