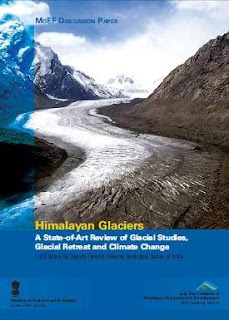 Given his involvement in a huge variety of extra-mural activities, whenever the chairman of the IPCC, Dr Rajendra Pachauri, makes a pronouncement on climate, it would be wise to assess where his true interests lie.

This most certainly should have been the case in early November, when the Indian environment ministry – with the support of its minister - published a detailed report of a scientific study, arguing that there was no evidence climate change had shrunk Himalayan glaciers.

Vijay Kumar Raina, the geologist who authored the report, admitted that some "Himalayan glaciers are retreating. But it is nothing out of the ordinary," he said, "Nothing to suggest as some have said that they will disappear."

Retreating glaciers, of course, are a central part of the iconography of the warmist movement. Only the previous year, UNEP, one of the IPCC's parent organisations, had announced that the world's glaciers were "continuing to melt away" with the latest official figures showing "record losses". It was, therefore, hardly surprising that the study was immediately denounced. But what was surprising was the vehemence of the attack – by no lesser person than Dr Pachauri, ostensibly in his role as chairman of the IPCC.

Speaking to The Guardian, he positively exuded vitriol, declaring: "We have a very clear idea of what is happening. I don't know why the minister is supporting this unsubstantiated research. It is an extremely arrogant statement."

He then went on to say, "My concern is that this comes from western scientists … it is high time India makes an investment in understanding what is happening in the Himalayan ecosystem," then snarling that such statements were reminiscent of "climate change deniers and school boy science".

Thus having vented his spleen, Pachauri rounded off by telling the paper, "I cannot see what the minister's motives are. We do need more extensive measurement of the Himalayan range but it is clear from satellite pictures what is happening."

The irony of this last statement is far from obvious, but the question about motives should have been addressed to Pachauri – he had three million of them. That is the price in euros of the EU research programme under which his institute had been awarded a contract – to assess the effects of the Himalayan glaciers retreat, caused by climate change. No wonder he was so keen on the need for "more extensive measurement".

The EU programme, given the unashamedly alarmist title "High Noon" after the classic Western film of the same name, had been launched in the May. It was to run for three years, "bringing together leading research institutions in the Netherlands, Britain, Switzerland and India," including The Energy and Resources Institute (TERI), of which Dr Pachauri is Director General.

Apart from his more obvious concern as chairman of the IPCC, Pachauri thus had an undeclared financial interest in protecting his own organisation's stake in a lucrative research project which depended for its very existence on the premise that: "Climate change is affecting the hydrological system of Northern India ... ". The last thing he needed was his country's own environment ministry debunking the very idea that climate change was a significant problem.

Fortunately for Dr Pachauri, the notoriously opaque European Union had not published the "inconvenient fact" of his involvement on its website, so the good doctor got away with it at the time. But for the local Indian newspaper, The Hindu, we would never have known.

Even then, the newspaper was unconscious of the further irony in its own report, quoting Daniele Smadja, the EU commission "Ambassador" to India, telling us that, "The EU and India enjoy strategic cooperation in the field of science and technology, with co-investment of resources from both players," adding: "This project in the field of climate change, research and glaciology takes this well-established partnership to new heights."

PACHAURI THREAD
Posted by Richard at 17:20