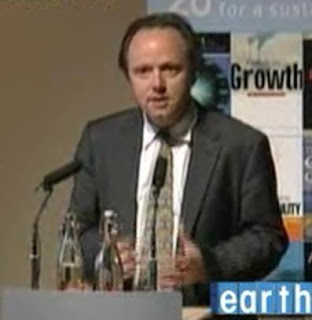 In a small step sideways from looking at TERI-Europe, we need to pick up a few loose ends before progressing the story.

We thus return to Ritu Kumar, whom we met in an earlier piece. She has it seems a taste for directorships, and is turning out to be a past master at multi-tasking.

It is not enough for this lady that she should be a director and company secretary of Pachauri's little enterprise, TERI-Europe, the Executive Director of the Sustainable Trade and Innovation Centre (STIC), a consultant to the Commonwealth Science Council and a senior adviser for Actis UK.

For the idle moments in her otherwise busy life, she as acquired another directorship, this time of a company called Investor Watch, formed on 27 April 2009. Her co-directors are Cary Krosinsky and Mark A Campanale, the latter being responsible for company research on the Jupiter Merlin Ecology Fund, the Merlin International Green Investment Trust PLC and the Skandia Ethical Selection Fund at Jupiter Tyndall Merlin.

Having placed the marker, we will return to these two gentlemen and their shared enterprise in due course. Both have very interesting links into the green movement. But we need also to look briefly at another of Kumar's co-directors of this newly-formed company, none other than Nicholas Vivian James Robins (pictured).

It is he, we ascertained in our previous piece, shares ownership of 27 Albert Grove with Ritu Kumar, the rather unlikely registered office of Pachauri's TERI-Europe. Both give this address as their residence.

Amongst his other activities, he is a leading light in the Network for Sustainable Financial Markets but his current paying day-job is director of the HSBC's Climate Change Centre of Excellence, which he joined in late 2007.

He started off his career with the Economist Intelligence Unit, moved to the EU Commission's Environmental Directorate and thence to the Business Council for Sustainable Development. From there moved to the International Institute for Environment and Development, before ending up with Henderson Global Investors, where he was head of SRI (Socially Responsible Investing) funds prior to joining HSBC.

If this is an interesting snapshot of a green activist pursuing his career path, what Robins does not reveal in his general cv (apart from the fact that he is living in the "head office" of TERI-Europe, prop. R K Pachauri) is that he is an active member of the Green Party - and has recently been a generous donor, contributing £5,500 to the party coffers. Moreover, he stood for election as a councillor in the 2006 local elections in his home area, the London Borough of Merton.

Here, strangely, there is a link with TERI, because TERI-Europe claims as one of its "partners" the London Borough of Merton which it assisted in "organizing a major seminar on energy efficiency and in incorporating renewable energy technologies in building design."

Why a suburban London Borough should need the help of the European arm of an Indian "think tank" is not explained. Even less so is why the seminar was funded by the European Union under its €42.3 million "Asia Urbs " project. However, as first sight, this looks to be a mechanism for channelling EU funds into TERI. Was Robins involved?

Whether there was a link, there is certainly a more tangible association between Robins's employer, HSBC, and an offshoot of TERI-India known as the TERI Business Council for Sustainable Development (BCSD). In partnership with this organisation, the HSBC proudly sponsors the Living Business SME Award.

Whether there is link between Robins and this award, again is not stated, but HSBC have certainly benefitted from their sponsorship. On 5 February 2009 at the Delhi Sustainable Development Summit, Naina Lal Kidwai, Group General Manager and Country Head, HSBC India, was presented by Dr R K Pachuri with the "prestigious" Green Globe Award in the business enterprise category "for her commitment to environment sustainability".

Sponsored by the newly-formed Green Global Foundation, the initiative of the Indian Film Academy and Wizcraft International Entertainment, UNEP and TERI, headed by R K Pachauri, are the partners of the foundation.

Friends of R K Pachauri, it seems, tend to do rather well out of their association with the man.

PACHAURI THREAD
Posted by Richard at 16:52