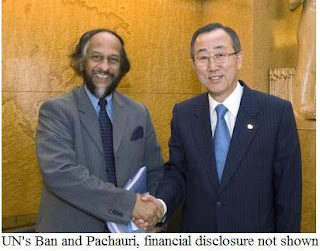 The New York Inner City Press, which specialises in "Investigative Reporting From the Inner City to Wall Street to the United Nations" has been on the Pachauri case today.

At a UN press conference on the Copenhagen Accord, the newspaper asked UN Secretary General Ban Ki-moon "about the scandal erupting around the undisclosed business interests of the chairman of the UN's Intergovernmental Panel on Climate Change Rajendra Pachauri, from the Tata Group through Deutsche Bank to Credit Suisse ... ".

Mr. Ban, we are told, entirely dodged the question, paradoxically using it as an opportunity to praise business. Pachauri's conflicts of interest are extensive and emblematic of the UN's lack of transparency and safeguards, the paper notes. So, notwithstanding the non-responsive answer, the paper asks: "does Mr. Ban believe that Pachauri should make public financial disclosure of these interests?"

Watch this site, it says.

James DeLong of the American Enterprise Institute is also sniffing round the edges. Contrary to what most people probably assumed (at least, I assumed), he writes, Pachauri is not a disinterested civil servant drawing his pay from the UN; he has a double interest in promoting IPCC recommendations that drastic action must be taken on climate change:

Adds DeLong, he is a policy entrepreneur - TERI is an environmental advocacy group, based on the assumption that there are indeed apocalyptic environmental problems that must be addressed - and he is a business entrepreneur working for organizations with a huge stake in getting the dogs to eat the food.

The organizations that have Pachauri on their payrolls seem to have adopted a rather interesting view of the ethics of paying someone who is presented to the world as an international civil servant, in furtherance of their desire to cash in on the climate change hoopla and obtain government subsidies and endorsements. DeLong adds.

PACHAURI THREAD
Posted by Richard at 16:43