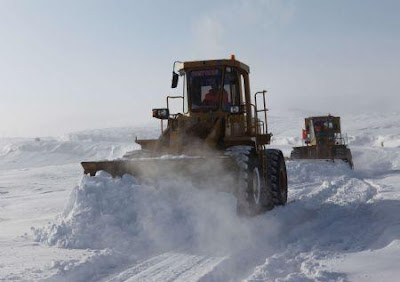 ... for the residents of China's Xinjiang province. After blizzards that started on Tuesday, a cold snap brought freezing temperatures and snow to the northwest, spreading to north and central regions, with temperatures plunging to as low as minus 40°C. Today, the average is -30°C.

More than 20,000 people have suffered damage to their homes or economic losses estimated at $1.5 million dollars) in Altay Prefecture in northern Xinjiang. More than 1,300 livestock died and almost 2,000 homes have been damaged while 34 collapsed under the snow. More than 100 vegetable greenhouses and livestock sheds also collapsed. The local government has deployed 57 disaster relief teams.

The international airport in Xinjiang's capital Urumqi was closed earlier this week due to snow, leaving nearly 4,000 passengers stranded. The snow also cut off power and heat supplies in Yining, a city of 430,000 people, overnight from Tuesday.

Meanwhile, we are told, the cold snap - a result of extremely cold air temperatures in western Siberia - is moving south, bringing wind and snow, and would drop temperatures by an average 10°C in the northwestern provinces of Gansu, Qinghai, Shaanxi and Ningxia Hui Autonomous Region. The cold is even expected to hit Peking, with winds of 25 mph adding a severe wind chill.

As far apart as the USA, in Europe and in China, we have extreme cold conditions plus record or near record snowfalls. In the US, for instance, we have reports of a "massive winter" storm moving eastward in a swath from Canada down into Texas. "This is a life-threatening system and any travel from tonight through Saturday will be treacherous, if not nearly impossible in many areas," says the National Weather Service.

And they reckon there's global warming? They are out of their tiny frigging minds.