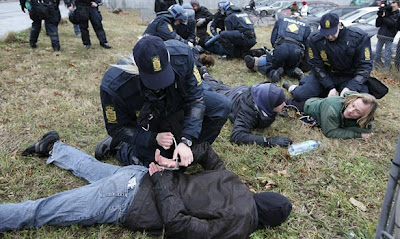 One of the complaints being heard from an activist after Friends of the Earth international, Avaaz, Tck Tck Tck and other mainstream environment coalition groups were refused entry to the Copenhagen slugfest this morning without being given any reason.

Furthermore, hundreds of non-government groups are to be individually banned from the centre or have their numbers slashed from tomorrow to make way for world leaders. Only 1,000 people from civil society will be allowed in to the conference hall tomorrow, and 90 on Friday when world leaders are present to strut their stuff.

What the poor little darlings don't seem to realise is that they are no longer wanted on passage. They've done their bit, stoking up the fantasy, but now the money men need peace and quiet to stitch up their deals and parcel out the loot.

This may have something to do with Denmark's Energy Minister Connie Hedegaard resigning as president of the conference. She describes the move as "procedural", which is about as convincing as Gore's predictions on Arctic ice.

With further disorder experienced this morning, it is going to be interesting to see how the greenies react when it dawns on them that they've been had. The police, however, have seen them coming and there are plenty of detention facilities ready for them.

It would almost be funny if it wasn't so serious, but the "joke" is on all of us. We are going to have to pay the bills for a long time to come.

CLIMATEGATE THREAD
Posted by Richard at 11:39