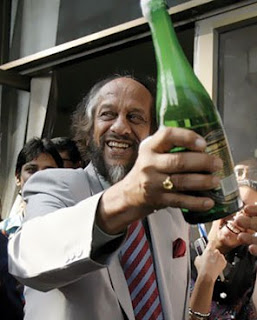 The mighty Rajendra Pauchauri, multi-millionaire extraordinaire, is now working terribly hard on trying to salvage his tattered reputation – but the harder he tries, the deeper he digs himself into a hole.

His latest effort is in the financial journal Thaindian where he tries to deny links between his institute, TERI, and Tata. " ... we decided in 2001 to retain the acronym and change the expansion. This signifies our independence from any direct Tata connection," Pachauri tells the journal.

Actually, the great man's memory is a little faulty. The "expansion" was changed in January 2003, not 2001 as he asserts – just after he had been appointed chairman of the IPCC.

As significant, look how the message is changing. He tells the Times of India on 21 December that, "Our ties ended when Darbari Seth, who was on our board, died in 1999. We haven't received a single penny from Tatas for years and have no ties with them."

As to our report that Pachauri "was part of groups, including green firms, which benefited from IPCC's recommendations, terming this a conflict of interest," with his rejoinder, the great man digs himself in even deeper. "[the] IPCC makes no policy recommendations ... There is nothing in this report that could have any proprietary benefit."

Dr Pachauri needs to do a little better than that. The IPCC does make policy recommendations. Has he not read this speech on 7 December in Copenhagen. "This conference must, therefore, now lead to actions for implementation by "all parties, taking into account their common but differentiated responsibilities," it says, and we also get: "This conference must also lead to urgent initiation of large scale mitigation actions."

The speaker may be a little bit familiar to Rajendra. He is Dr Rajendra Pachauri, Chairman, Intergovernmental Panel on Climate Change (IPCC).

As to "proprietary benefit", he ought to listen to his boss, UN Sec-Gen Ban Ki-moon. Only the other day, he was telling reporters that businesses are bound to profit from a world-wide agreement on climate matters. "... I'm sure that the business community will shift their business operations towards a green growth economy."

As we, observed earlier, our Dr Pachauri is not only a liar - he is not even a very good liar. He needs to try harder - we know he can, viz his experience in the Delhi High Court of suppressing material facts swearing to false affidavits. This is getting too easy.

PACHAURI THREAD
Posted by Richard at 15:08