How wrong can you get? 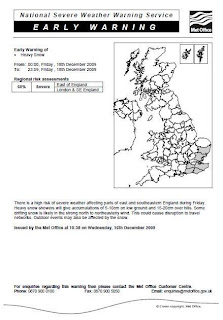 On 29 November, there was this in The Daily Mail:

"Weather forecasters have predicted a mild winter for Britain as Prince Charles continued his tour of flood devastated Cumbria.

The Met Office said there was a 50 percent chance of a mild winter thanks to the Pacific weather system El Nino - although many will take its prediction with a pinch of salt after it forecast a 'barbeque summer' earlier this year even though it rained throughout June, July and August."

One hopes that not too many people will be taking a pinch of salt – it looks as if we will need it for our roads:

"There is a high risk of severe weather affecting parts of east and southeastern England during Friday.

Heavy snow showers will give accumulations of 5-10cm on low ground and 15-20cm over hills. Some drifting snow is likely in the strong north to northeasterly wind. This could cause disruption to travel networks. Outdoor events may also be affected by the snow."

Do not forget, incidentally, that the computer models the Met Office uses for its forecasts are the same as those used for the long range climate predictions.

CLIMATEGATE THREAD
Posted by Richard at 18:21