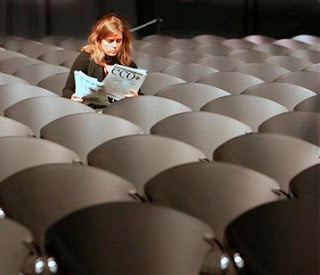 Confirmed by Sky News and the BBC, we hear that the main sessions at the Copenhagen slugfest have been halted after a protest led by African countries and backed by the G77 group of developing nations.

The group has accused developed countries of trying to back out of the Kyoto Protocol on carbon emissions. We are told that they have refused to continue negotiations unless talks on a second commitment period to the treaty were given priority over broader discussions on a "long-term vision" for action on climate change.

This, of course, is theatre. But underlying it is a very serious issue. In 2012 the Kyoto treaty falls, and with it the mechanisms which underpin carbon trading. Unless the protocols are renewed, a multi-billion dollar industry falls apart – the money tree is under threat.

And, as Open Europe reports today, we are talking about seriously big money. The volume of carbon trading across the globe has increased dramatically in recent years. According to the World Bank, the value of the ETS market increased from $49 billion to $91 billion between 2007 and 2008.

This, however, pales into insignificance when the global market is estimated to be worth anything from $1-2 trillion by 2020. With such huge sums at risk – trading in the ultimate non-product – it is easy to see why such enormous effort is being expended to elevate the global warming hype. Without the support of the belief system which fuels the whole racket, this vast ponzi scheme will come crashing down.

The irony of it all is that, as James Hansen himself agrees, this money-making racket will have no overall effect on emission levels. But then, it is not intended to. This is a money-making scam on a colossal scale, a confidence trick perpetrated in plain sight, giving endless opportunities to rip-off the public.

And all that is now at risk – only the risks are actually very slight. Nonetheless, even a hint of the money tree wilting is enough to trigger the response we see today. In truth, though, too many pockets are being lined to let the system fall. They will fudge it, and the rip-off will continue with a new treaty. That will have no impact whatsoever on the climate, but it will keep the money flowing.

CLIMATEGATE THREAD
Posted by Richard at 14:02