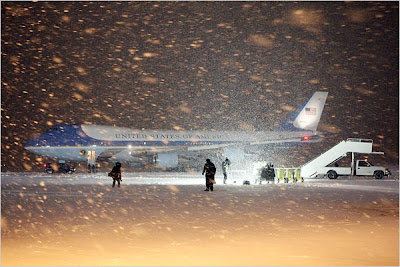 A major winter storm was moving up the Atlantic Coast on Friday night, with forecasters expecting accumulations of one to two feet of snow in some areas by Saturday night, reports the New York Times.

Winter storm warnings were in effect from Tennessee and North Carolina to the southern New England states, and the storm was expected to affect Washington, Baltimore, Philadelphia and other cities. A blizzard warning was in effect for Long Island. The National Weather Service said travel conditions in those areas would be "extremely treacherous" by Saturday morning. 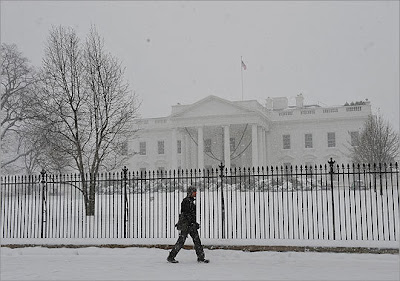 In Washington, Mayor Adrian M. Fenty declared a snow emergency, effective at 7 am. Saturday. "All indications are this will be a major storm — perhaps the biggest we've seen in several years," he said in a news release, "and we are going to throw everything we have at it to keep the District open for business on this busy preholiday weekend."

The pictures above show president Obama's personal jet after his return from the global warming summit in Copenhagen, and the scene at his detached house in Washington DC. Kinda appropriate.

CLIMATEGATE THREAD
Posted by Richard at 19:05