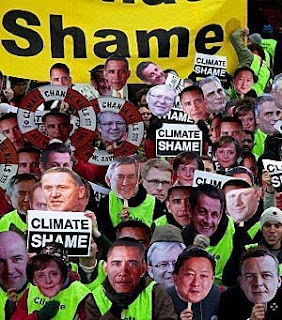 The slugfest has gone into overtime. World leaders are deadlocked on a deal to tame global warming, despite pleas for an agreement from US President Barack Obama, says AFP and just about everybody else.

"At the scheduled 6pm close of a summit, the climax of 12 days of negotiations in Copenhagen, leaders were still thrashing through the text of a draft accord - deeply split over how to curb carbon emissions and muster the funds to combat climate change."

Much more interesting is Navin Singh Khadka, one of the Beeb's team covering the slugfest in Copenhagen, earnestly briefing us about the "Fight to control Copenhagen climate change fund".

Khadka is telling us that, apart from the headline battles in Copenhagen, "behind the scenes an equally big issue is being thrashed out. It's a fight for control of the massive new fund that will challenge our changing climate." He has completely, utterly and totally missed one of the biggest scandals of our time.

Like, er ... why is this money – our money - being used to build a massive, coal-fired power station in India? Owned by you know who.

CLIMATEGATE THREAD
Posted by Richard at 19:28