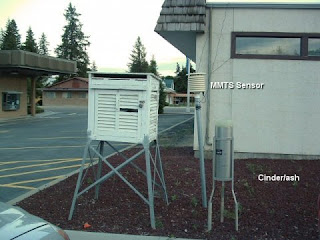 We did not need to rely entirely on "Climategate" or the meticulous work of Anthony Watts and Steve McIntyre - plus the many other sceptic workers – to raise serious questions about climate science. For decades, many serious and honest scientists in the field have also been pointing out flaws in the climate monitoring system.

Only at the top end do we find unqualified confidence in the system. Thus, even as the "Climategate" controversy was intensifying, "superstars" of the profession such as CRU director Phil Jones were able to tell the BBC: "We have always been scrupulous in ensuring our science is robust and honest."

At the heart of the controversy, of course, it the accuracy of the data on which climate scientists base their projections and, central to that is the accuracy of the surface temperature records – about which there have been expressed various degrees of reservation for some considerable time.

Most recently amongst those who are pointing out flaws in the system, we see the US Board on Atmospheric Sciences and Climate. While visibly, it supports the high-profile National Academies campaign on global warming, behind the scenes its own members conducted a remarkable study of the US climate monitoring system, sponsored by a number of US government departments – including Nasa and the EPA.

From this study, it concluded that "all is not well" with atmospheric and related environmental observations. Overall, it found, "the status of US surface meteorological observation capabilities is energetic and chaotic, driven mainly by local needs without adequate coordination."

It terms of the "key baseline dataset for monitoring US climate" on which climate researchers rely for comparison with more recent data, in the US this is provided by the US Historical Climatology Network (USHCN). Predictably, the Network website claims that it is: "is a high-quality data set of daily and monthly records of basic meteorological variables from 1218 observing stations across the 48 contiguous United States."

However, most of the stations providing data are part of US Cooperative Observing Network – popularly known as the COOP (see top illustration) – on which there was an interesting report published last year on experiences in Kentucky.

It found that the COOP network suffered from a number of shortcomings, including problems with sites that had poor instrument exposures and instruments that were not well calibrated or broken. In many cases, poor historical metadata and undocumented observing practices at individual sites made it difficult to assess the quality of observations.

Problems were not confined to temperature recording. In one case, researchers found a precipitation gauge located under a canopy. This station observed the longest period of "no precipitation" in Kentucky, yet was entered into the official climate record for the State.

During site visits, researchers also found temperature sensors located over a driveway and grilling stove, next to an asphalt parking lot and next to brick buildings. In another case, they found a sensor located at the bottom of a narrow creek valley where cold air could drain. This site reported the record low temperature for Kentucky.

The report of this highly localised effect is especially interesting as it points out a variable which does not seem to be addressed when records are adjusted. This was highlighted by a group of researchers in 2005. 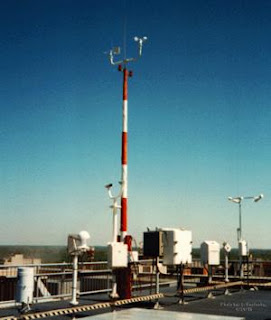 They noted that adjustments to data observed at pairs of climate stations have been recommended to remove the biases introduced by differences between the stations in time of observation, temperature instrumentation, latitude, and elevation.

However, by then, a new network of climate stations, located in rural settings, allowed comparisons of temperatures for several pairs of stations without two of the biases (time of observation and instrumentation). The daily, monthly, and annual minimum, maximum, and mean temperatures were thus compared for five pairs of stations included in the US Climate Reference Network.

Interestingly, the researchers found "significant differences" between the paired stations in the annual minimum, maximum, and mean temperatures for all five pairs, the results suggesting that "microclimate influences" had a significant effect on the recordings, potentially much greater than influences for which corrections had been undertaken.

Within the realms of adjustment, other researchers noted that the "homogenized" USHCN dataset contained several statistical adjustments.

One of the adjustments, they observed, directly reflected the effect of instrument changes that occurred in the 1980s and about sixty percent of the station records were adjusted to reflect this instrument change, by use of separate constants applied universally to the monthly average maximum and minimum temperatures - regardless of month or location.

However, in 2006 these researchers found that the magnitudes of bias due to the instrument change at individual stations range from less than −1.0°C to over +1.0°C and some stations showed no statistical discontinuities associated with instrument changes. Others showed a discontinuity for either maximum or minimum but not for both. Therefore, they concluded, the "universal constants" to adjust for instrument change in the USHCN were "not appropriate".

Yet such "universal" corrections are still variously applied to records, despite other studies which show that instrument biases can exhibit significant seasonal variability.

As for instrument changes, the transitional mercury in glass max-min thermometer is giving way to high technology and automatic electronic sensors. One system which is already in place is the Automated Surface Observing System (ASOS) - illustrated above right. Deployment began in 1991 and the network was completed in 2004 with about 900 installations – mostly at airports, their primary purpose being to provide weather information for aviation. 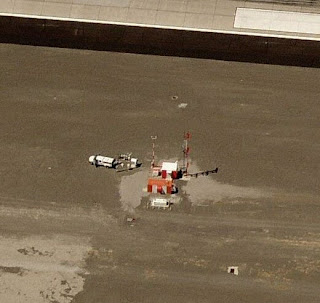 With placement problems even pointed up by officials, it neverthless takes Anthony Watts to highlight the significant influence of heat island effect. One airport site he examined yielded temperatures higher than a nearby desert location.

But other researchers have also pointed out significant instrument inaccuracies, with one report of a "self-heating error" regarded as "quite serious" as it could "make [the] temperature 0.5°C higher". Yet another official researcher suggested that ASOS could routinely deliver temperatures higher than previous equipment. This gelled with another study, which also demonstrated that the air temperature error varied greatly depending on wind speed and shield type, ranging from +5° to nearly +20°C at the lowest wind speeds.

The multiple-plate radiation shields (illustrated below right) of the type used with the ASOS equipment usually had air temperature errors of about 0.5°–1°C but they sometimes reached nearly 2.0°C during the daytime. Furthermore, a change from one type of shield to another, the researchers observed, caused systematic changes in the air temperature biases. And, to complicate the issue further, the errors can differ according to the surfaces on which the equipment is placed.

These errors are known in the jargon as "inhomogeneities". Dataset compilers have developed statistical methods to identify and account for the changes, as a result of which adjusted figures are claimed to show trends and variability in climate and not the presence of non-climatic bias. However, even NOAA researchers admit that "traditional" inhomogeneity detection schemes have a limited ability to detect discontinuities that have occurred in ASOS station commissioning.

Although new statistical techniques are being developed to remove these "inhomogeneities", as the gap between the raw data and the final product becomes greater and greater. This in turn opens the way for other biases and inaccuracies.

When there is no direct relationship between the raw data and the end product, trust in the good faith of the researchers becomes absolutely essential. And it was this, already shaky, that was destroyed with "Climategate". 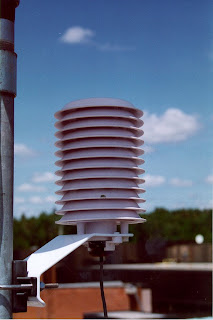 But the doubt is by no means confined to the activists. A narrative produced by the University of Wyoming notes that in its home state, because it is mostly rural with minimal contamination of its climate record, temperature and precipitation trends during the past 70 years have shown only the weakest indication of change.

As to whether the US Climate Reference Network has experienced any significant climate changes, the narrator observes gently (perhaps with some irony, that "these high quality weather stations" are located so that the effects of urbanization or other land-use changes in the vicinity of these stations are held to a minimum.

"However," he adds, "this has not always been successfully achieved." Some of these stations have been relocated over time and a correction factor to tie both locations to a similar climatology "may have been incomplete."

As we noted earlier, however, climate researchers are basing their predictions of doom not on gross observable changes but on minuscule differences in temperature amounting to a fraction of one degree, to the accuracy of two places of decimals.

Of the situation in the US – one of the best and most comprehensive in the world – we see errors of the order of several magnitudes greater than the differences the researchers purport to be able to measure. And that is without factoring in the rest of the world, huge gaps in data and massive discontinuities in the historical record.

In what is acknowledged to be a chaotic system, there is, as one commentator observes, a situation where the precision exceeds the accuracy – this is false precision.

Where the activists are clamouring to keep the supposed rise in global temperature to below 2°C, it must be highly questionable whether the monitoring system is actually capable of detecting a change that small. The climate figures are a sick joke.

CLIMATEGATE THREAD
Posted by Richard at 21:48